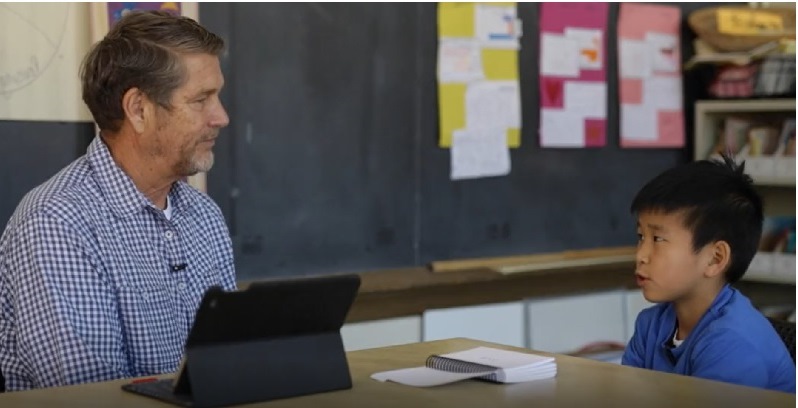 What Was Nathan Thinking?

In this blog, I present a lesson called What Was Nathan Thinking? The lesson is built on a video clip of Nathan explaining to Rusty Bresser how he knows that 6 x 5 = 30. It’s a short video clip, less than 15 seconds, but offers a great deal for students to think about. Take a look.

I’ve organized the blog into three parts:
PART 1 presents a lesson plan for using the video. PART 2 describes what happened when two different teachers tried the lesson, one with fourth graders and one with fifth graders. PART 3 expands on the mathematical potential of the lesson and offers suggestions for extending students’ learning. I know that 6 x 5 isn’t something that we would typically focus on in either of these grades, but I’m convinced that this basic multiplication fact is useful for building students’ mathematical understanding in important ways.

PART 1: Lesson Plan for What Was Nathan Thinking?
Step 1. Lead a Number Talk: Present the problem 6 x 5 to the class and ask for ways to explain why 30 is the correct answer. Record students’ ideas on the board, representing their thinking mathematically as we do in number talks.

Step 2. Show the Video: Have the class watch the clip of Nathan. (Most likely show more than once.)

Step 4. Students Explore Problems That Do and Don’t Work: Ask students, either in pairs or individually, to explore Nathan’s idea by finding at least five other multiplication problems where they’d get the right answer by applying his method (that is, by halving one factor and then tacking on a zero) and five problems where Nathan’s idea wouldn’t give a correct answer.

Step 5. Discuss and Summarize: On the board label two columns—Nathan’s idea works and Nathan’s idea doesn’t work. List students’ ideas. Maybe first focus on problems that work. Go around the room and ask pairs to give one problem from their list of problems that work and record the equation (e.g., 8 x 5 = 40). Continue until no one else has an idea. Repeat, this time going around the class and having pairs give problems that don’t work. Or, another way is for the pair to present a problem and the class decides which column it belongs in.

Step 6. Give a Writing Assignment. Ask students to write a letter to Nathan about his idea.

Step 7. Discuss the Mathematics: Why does Nathan’s method work for some multiplication problems but not for others? Use the results from the Number Talk and also from their writing for further discussions on following days.

PART 2: What Happened in Two Classes
Two friends were interested in trying the lesson. Michael Pershan taught it to his fourth graders at St. Ann’s School in Brooklyn, NY, and Leo Kostelnik, a former classroom teacher and principal who is now the district K–5 math coordinator, tried the lesson with fifth graders at Edna Maguire Elementary School in Mill Valley, CA. Michael sent photos from the lesson and the letters the students wrote to Nathan. Leo lives nearby and he brought the student work to me that afternoon so we could review it together. Leo didn’t have the students write to Nathan but instead told them that he was coming to talk with me and that I was interested in their thinking—a similar goal of setting up an audience for the students to communicate their ideas. Here’s how the steps in the lesson unfolded in their classes.

Step 1. Lead a Number Talk
Michael sent a photo of the how he recorded the students’ ideas for why 6 x 5 equals 30. 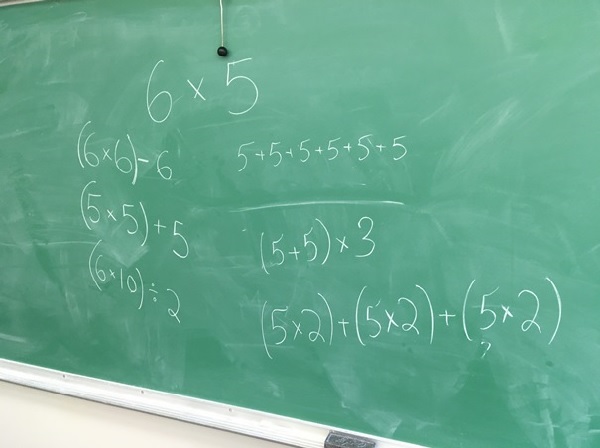 When Leo and I looked at this photo together, Leo said that the students in the class he taught came up with essentially the same ideas. Different, however, was how Leo and Michael recorded some of the students’ ideas. For example, both had a student who said something like, “You can multiply 6 times 10 and then divide by 2.” 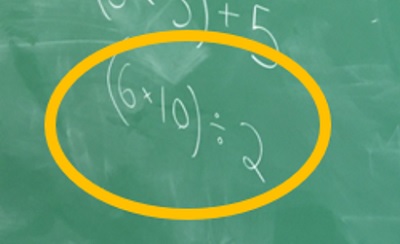 Michael recorded the student’s idea with this expression:
(6 x 10) ÷ 2
Leo represented the same idea using two equations:
6 x 10 = 60
60 ÷ 2 = 30
My Reflection #1
There’s not just one way to record students’ thinking in number talks. (Making judgments in the moment is a huge part of teaching.) The goal for recording is to represent the students’ thinking in a way that both reflects their ideas and also models symbolic representations. My thought for a follow-up discussion is to present both representations to students and ask, “Do these represent the same reasoning? If so, why? If not, why not?”

Step 2. Show the Video
The video clip of Nathan and Rusty is less than 15 seconds. It goes quickly. Michael showed the video twice. Leo reported that most students were satisfied after watching it twice, but others asked to see it again. Leo told me that after showing it several more times, he heard “What?”s turning into “Ohh”s.
My Reflection #2
This was another reminder to me about the need to make decisions as we teach and take our lead from the students.

Step 3. Students Describe Nathan’s Idea
The goal here is to be satisfied that students understand Nathan’s method well enough so they can replicate what he did with other problems.
My Reflection #3
A major shift from my early years of teaching is that I’ve learned to explain less and listen more. As a beginning teacher, I might have explained to the class what Nathan did. Later I realized that I needed to sit back and give students opportunities to make sense of ideas and listen to them explain their thinking.

Step 4. Students Explore Problems That Do and Don’t Work
Michael’s students recorded on whiteboards and Leo’s recorded on paper. Their results were remarkably similar.
My Reflection #4
I think it’s important for students to have experience recording their ideas, whether on whiteboards or on paper. Learning to organize their thoughts and then communicate them in writing is an important skill in math class and in general. 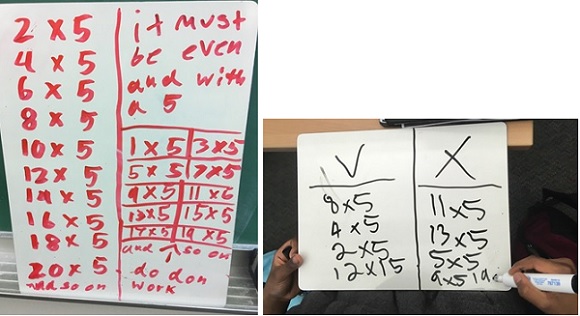 Step 5. Discuss and Summarize
Both Leo and Michael had students share their ideas and recorded them on the board. Michael also had students display their whiteboards.
My Reflection #5
Sharing the whiteboards gave students access to how their classmates organized their thinking.

Step 6. Give a Writing Assignment
Michael’s students wrote letters to Nathan while Leo’s students wrote letters to me. Leo learned that the students need more practice and guidance for organizing and expressing their thoughts in writing in math class using words, numbers, and pictures as needed. He plans to work on this with them.
My Reflection #6
Students’ work is where I first go for clues about what next to do.

Here are some of the letters from students in the class Leo taught.

Step 7. Discuss the Mathematics
Both Michael and Leo are interested in what they might do next from this experience. My mind is spinning with thoughts. Here are some ideas.

2. Collect Ideas from Students’ Letters
Identify the student’s ideas as “conjectures” and have students discuss whether they are always true, sometimes true, or never true. Below are direct quotes (including their misspellings) from students’ letters.

3. Connect to Rectangular Arrays
I think this is an opportunity to make a connection between multiplication and rectangular arrays. Ask students each to cut out a 6-by-5 array from squared paper. Have students verify that there are 30 stars and connect to 6 x 5 and 5 x 6. Then ask them to explore how they might use the array to show Nathan’s method. Let them know that it’s OK to cut out another 6-by-5 array if they need another example. As students work, you may need to offer some suggestions: How could you cut the array into two pieces to show what Nathan did with the 6 in the problem? How can you arrange the two pieces to show Nathan’s next step?

Create an array that matches 6 x 5. 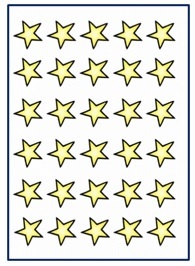 Cut the array so you halve the 6. 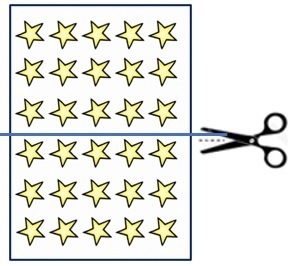 4. Doubling and Halving
A confession: When I first listened to Nathan’s explanation, I immediately thought about how halving one factor and doubling the other results in the same product. This is an idea I’ve explored with students and written about in Chapter 4, “Silent Multiplication” from Lessons for Extending Multiplication, Grades 4–5 (which I wrote with Maryann Wickett as part of the Teaching Arithmetic series). In Chapter 4, we focus on students exploring the effect on products when one factor is doubled, when both are doubled, when one is halved, and when one is doubled and the other is halved. It’s this last option that offers another way to describe Nathan’s method. (It isn’t what Nathan described, but it’s another way to explain mathematically about changing 6 x 5 to 3 x 10.) Generalizing about doubling and halving makes it possible to think about problems other than where one factor is even and the other is 5. Interested? Here’s a PDF.

A LAST REFLECTION
I was struck how a “simple” multiplication fact like 6 x 5 can lead to so many other mathematical ideas and understandings. With the pressure from all we have to teach, we can fall into what’s been described as teaching that’s “a mile wide and an inch deep.” In a way, I hope this blog demonstrates what math teaching can look like when it’s “an inch wide and a mile deep.”

This lesson is one of a series of What Were They Thinking? lessons that Lynne Zolli and I are creating using Listening to Learn (LTL) video clips. When interviewing students to learn how they reason, we’re often surprised, intrigued, and delighted. Their thinking stretches our own thinking and informs our instruction. Similarly, we think it’s also valuable for students to learn to listen to each other during class instruction. Understanding how their classmates reason can expand their own thinking. Here’s another lesson example, What Was Jonah Thinking?