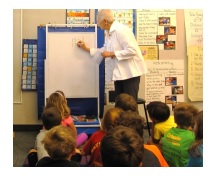 When I visited Joe’s third-grade class, he was concerned about the results on his students’ homework from the day before. It was a computation 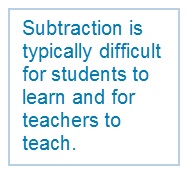 practice assignment, and practically all of the children had either gotten the wrong answer to 503 – 398 or indicated that it was “too hard.” (Writing “too hard” was an option they had to let Joe know when they couldn’t figure out how to do a problem. This gave Joe useful feedback about what he needed to work on, either with the entire class or with specific students.) Joe asked if I could give some help.

The problems on the homework assignment were all written vertically, so that students could apply the standard algorithms they were learning. But to trigger their thinking without focusing on the procedure they had learned (which wasn’t serving most of them here), I brought them to the rug, made sure each student had a partner, and wrote the problem horizontally on the board:

Making an Estimate First
“The numbers in this problem aren’t particularly friendly,” I said. “Let’s think about changing them to friendlier numbers and estimating the answer.” Making estimates is something I do regularly with students to give a ballpark solution against which they later can compare their answers. The students agreed that an easier problem to solve would be 500 – 400, which they knew was 100. I recorded this underneath.

These are good reasons to use an open number line.

What I don’t like about the open number line is its name. First of all, I rarely draw a line. And when I locate numbers, I don’t make their locations proportionally correct, as they should be on number lines. In a way, this makes the math part of my brain screech. (That said, I do pay some attention to spacing—for example, I wrote 400 and 500 far apart with 398 next to 400 and 503 next to 500.)

But, despite the imperfect name, I do like how open number lines empower students.

Next I wrote the numbers from the original problem:

I recorded small jumps to show those differences:

I then said to the class, “Turn and talk again and see if what I drew convinces you about what you thought or helps you to change your mind.”

I then had them return to their desks. I showed other examples using simpler numbers and modeling various ways to make jumps, and I gave them practice with trying some on their own.

Students Solve 503 – 398 Again Using Two Different Ways
After a few days of practicing with other examples, I gave the students the assignment of solving 503 – 398 again. I asked them to figure out the answer in two different ways. What I loved about their work was the variety in their thinking. See the four examples below.

Camille used the open number line and then the standard algorithm.

Laura used the open number line for both solutions but in two different ways. In her second solution, she reversed the order of 503 and 398 and subtracted instead of adding.

Fran used the open number line, but not as I had demonstrated. She made a first jump to add 10, then subtracted 5 (trying to get back to 403 for an easy last jump to 503), and then made a final jump of 100. After this, she represented her thinking in another way. Both methods are unconventional, but both show reasoning and number sense.

Classroom Suggestions
Try this lesson as I described it, adjusting the numbers to be appropriate for your students. For younger students, start with subtracting multiples of 10, like 60 – 20. (I find that while some students are comfortable making one leap of 40, others makes leaps of 10 or 20. All of these are fine methods.) Or use a two-digit problem like 82 – 57, encouraging students to use multiples of 10 as benchmarks. For older students, try a problem with greater numbers, like 5013 – 1998.