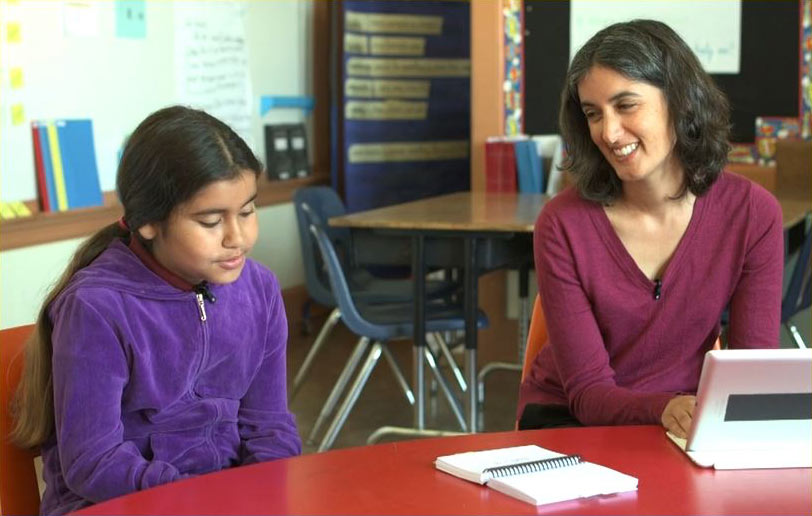 Interviewing students—asking them to do math without paper and pencil—has pushed me to learn more about how they reason numerically than I ever did before in my years of teaching. When focusing on division in our Listening to Learn interview tool, one question we ask students to solve is 100 ÷ 3. We included that problem in the interview for several reasons.

Meet Zaynab and Mallika
Zaynab was a fifth grader, here interviewed by Mallika Scott. I’d spent a good deal of time in Zaynab’s class both when she was a fourth grader and then the next year when this interview was done. She was a thoughtful student and a competent math thinker. (I’ve worked with Mallika on a variety of projects, including Do The Math and the Math Reasoning Inventory. She now teaches math methods courses at California State University, Fullerton.)

Before presenting 100 ÷ 3, Mallika asked Zaynab to solve 32 ÷ 5. For this question, Zaynab thought for a moment and then answered, “Six remainder 2.” She explained, “Because I knew that 6 times 5 equals 30 and there would be 2 remainder.”

However, when Mallika presented the problem 100 ÷ 3, Zaynab’s response was decidedly different. Take a look.

What I learned from Zaynab

About Sharing vs Grouping Division Problems
The context of the Origami paper problems led Zaynab to think about 100 ÷ 3 as a sharing division problem―sharing 100 pieces of paper among three classes. She first gave each class 25 pieces and then figured out how to share the remaining 25 pieces. A grouping division problem , still using Origami papers, might be: I have 100 pieces of Origami paper and I want to give each student three pieces. How many students will get a packet of three Origami papers? When we introduce students to division, we provide them experiences with both sharing and grouping situations. The answer is numerically the same for both problems―33 with a remainder of 1―but students’ solution strategies might differ. Students benefit from experiences with solving problems that involve both interpretations of division.

Using Zaynab’s Thinking for Class Instruction
It might be interesting to use Zaynab’s reasoning for a class lesson. One of the values of video clips like this one is how they can help spark other students’ thinking. For example, imagine showing your class this video clip and then asking the students to discuss how Zaynab reasoned. This would be appropriate only after the students had grappled with the problem themselves. (You can read a previous blog I wrote about engaging Zaynab’s class in thinking about how Jonah, a student from another school, solved 100 ÷ 3 and got the answer of 33 ¼.)

Listening to Learn Labs―Interactive Professional Learning
Watching the video clip multiple times was incredibly helpful for me to understand Zaynab’s reasoning. Also, I talked about the clip with several colleagues. These two experiences―watching the clip multiple times and talking with colleagues―is what I found to be an extraordinary professional learning opportunity for me.

Watching video clips, reflecting on them, and talking with colleagues is an opportunity we provide in our three categories of Listening to Learn Labs. In our Reasoning Labs, we focus on how students solve specific interview questions. In our Strategy Labs, we unpack the numerical reasoning strategies that students need for solving problems mentally. In our Interview Labs, we address questions that relate to interviews more generally, questions like When is wait time important and useful during interviews?, What if a student self-corrects and changes an answer?, When is it helpful to ask additional probing questions during an interview? and more.

Next Steps Suggestions for Instruction
At the end of all of our Listening to Learn Labs, we provide next-steps suggestions. Here are two instructional ideas.

Game: Leftovers from 100
This is a two-player division game that engages students with solving division problems with and without remainders. Display the numbers from 1 to 20 and play with a student to introduce the rules to the class. Player 1 crosses out a number (now no longer available), divides 100 by it, and scores the remainder. Both players subtract the crossed-out number from 100 to determine the new start number. Player 2 then crosses out another number from 1 to 20, divides 100 by it, and scores the remainder. Again, both players subtract the crossed-out number to get the new start number. Play continues until all of the numbers from 1 to 20 have been crossed out or the starting number is zero or it’s no longer possible for either player to score. Players add the remainders they scored and the player with the greater total is the winner.