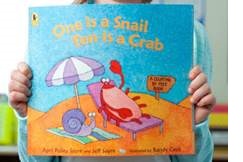 I’ve found that children’s books are extremely effective tools for teaching mathematics. They can spark students’ math imaginations in ways that textbooks or workbooks don’t. Connecting math to literature can boost confidence for children who love books but are wary of math. And students who already love math can learn to appreciate stories in an entirely new way.

One book that I’ve read to many first and second graders, always to the delight of the children, is One Is a Snail, Ten Is a Crab by April Pulley Sayre and Jeff Sayre, illustrated by Randy Cecil (Candlewick Press, 2003). The book counts by groups of feet—1 is a snail (because a snail touches the sand on the beach at only one spot, with its belly), 2 is a person, 3 is a person and a snail, 4 is a dog, and so on, up to 10 is a crab. Then the book continues by multiples of 10 up to 100, which the illustration shows as 10 crabs and also as 100 snails. Read on for how I used the book in a lesson with a class of second graders. 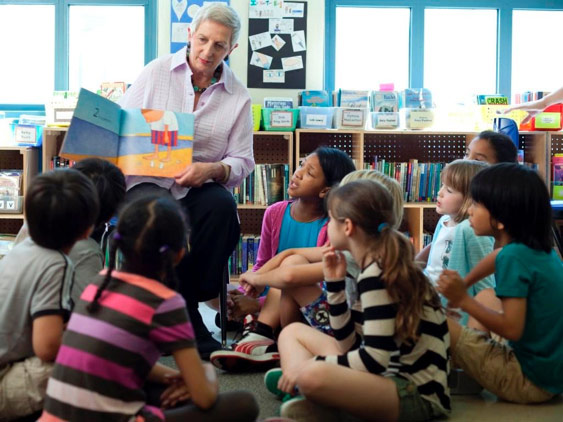 Here I’m showing the spread in the book for the number 2. 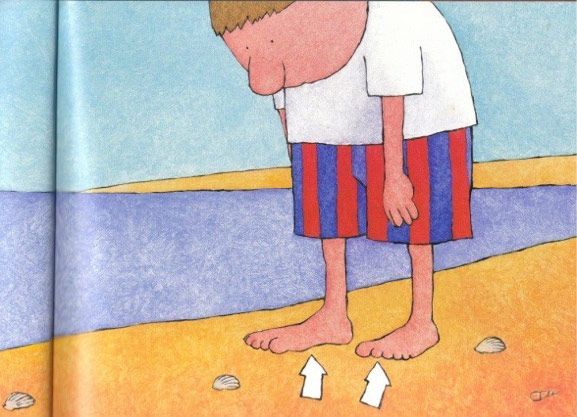 Two is a person, the book states, and the illustration includes two arrows pointing to the person’s two feet touching the sand at the beach. 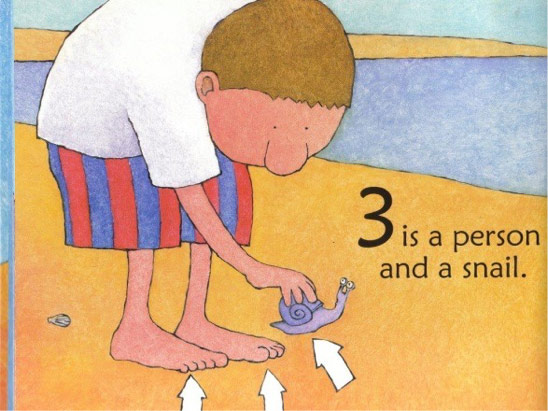 The next page reveals that 3 is a person and a snail. Before I continued, I asked the students to predict the next number and how they thought the book would describe and illustrate it. They all predicted that the next number would be 4, but they had different ideas about what the illustration would be—a cat, a dog, a horse, and so on. 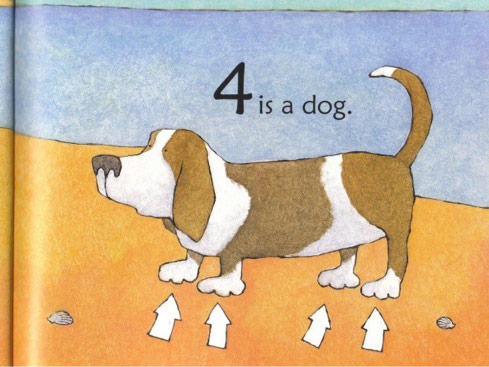 I told them their ideas were all fine and then I turned the page to show that the next page shows 4 as a dog. The book continues by showing 5 as a dog and a snail, then 6 as an insect, 7 as an insect and a snail, 8 as a spider, and so on. The students caught on to the pattern. 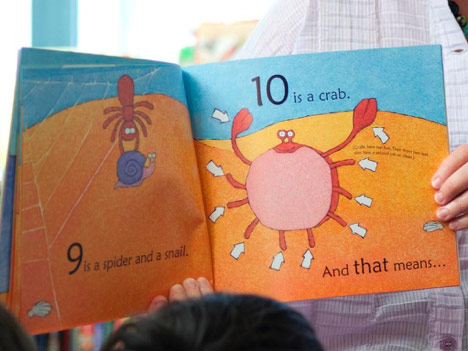 This spread shows 9 on the left page as a spider and a snail, and 10 on the right page as a crab. (The text explains that the crab’s claws ccount as feet.) “So what number will come next?” I asked. The students all predicted 11. But when I turned the page, they learned that they were wrong! 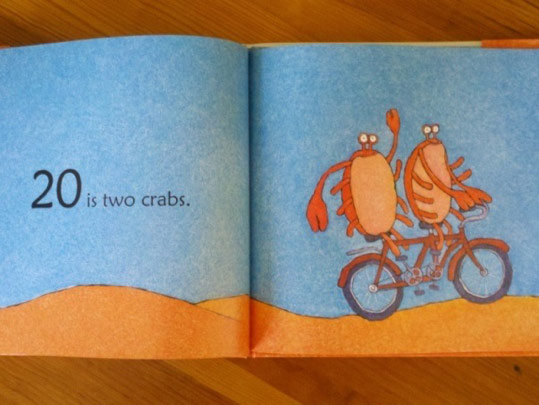 The number 20 comes next, and the illustration shows two crabs. We talked about 20 being equal to two 10s. 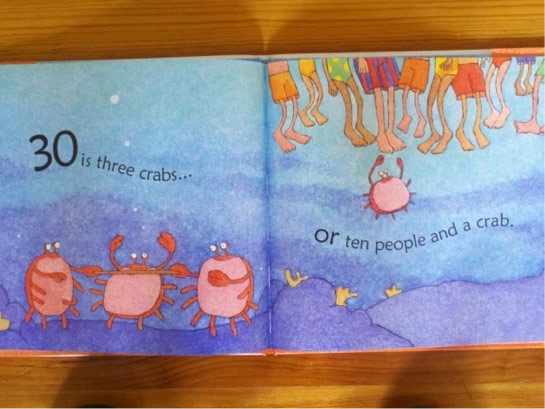 Then comes 30, shown two ways, as three crabs on the left and as 10 people and one crab on the right. 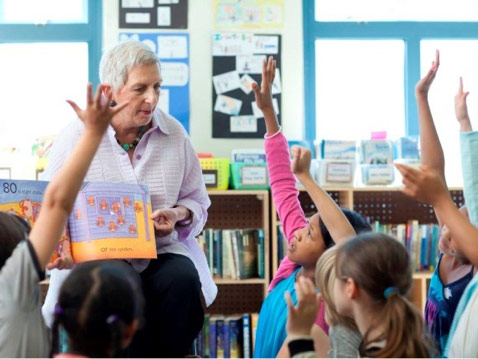 The students caught on to this new pattern as the book continues with 40, 50, and so on, showing each number in two different ways. Here I’m showing the spread that presents 80 as eight crabs or ten spiders. 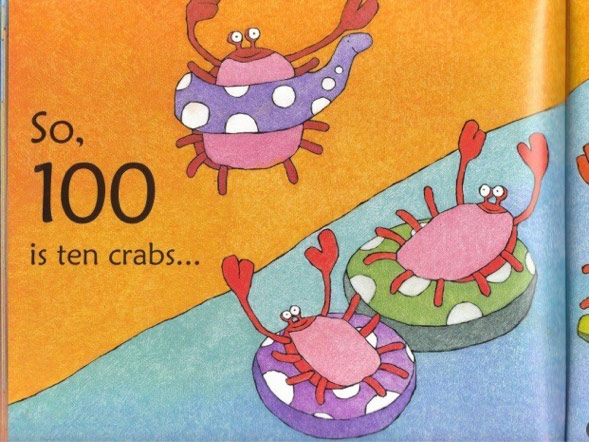 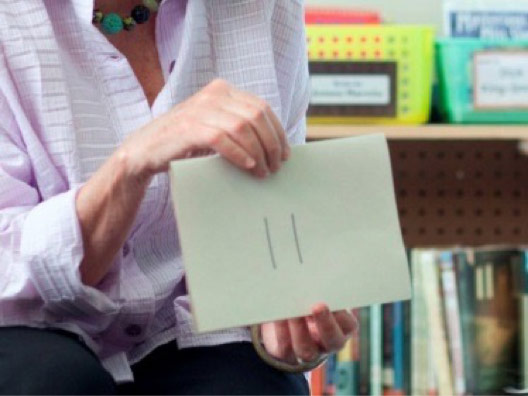 I transitioned into a riddle activity. I had folded a sheet of paper to prepare a riddle. I had written 11  on the outside and inside I had written two equations, one relating to the context of the book and the other with numbers. I asked the students to guess my equations. Doing this modeled what they would be doing independently in a few minutes. There were various guesses. 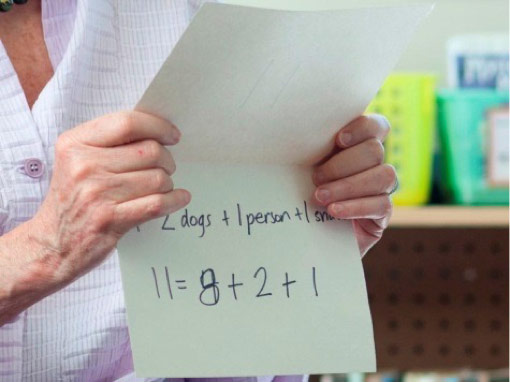 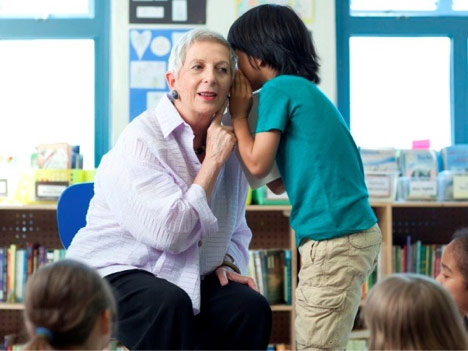 When I gathered the class again on the rug, I asked for a volunteer to come up and present. Here this student is telling me what he had written. He didn’t want to show me the inside of his card because he wanted to be careful that no one else could peek and see. 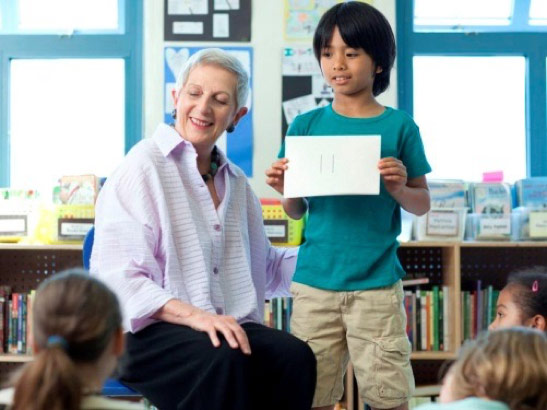 He was a bit bummed when the first person he called on guessed correctly, both the equation in the context and with the numbers. You can see here that he looks slightly disappointed. I think he was hoping for a longer run up in front of the class. 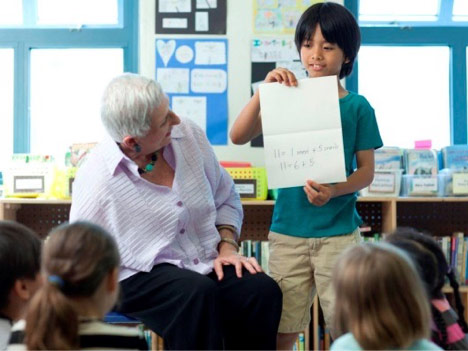 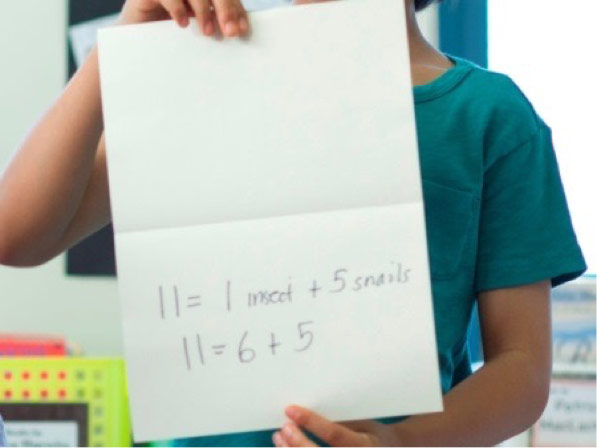 . . . to show everyone his equations. 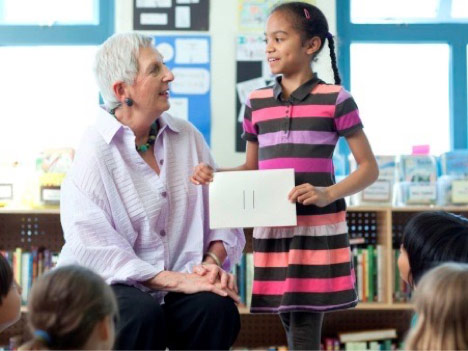 I chose this girl to present next. She’s very shy, usually quiet, and being in front of the class was a push for her. 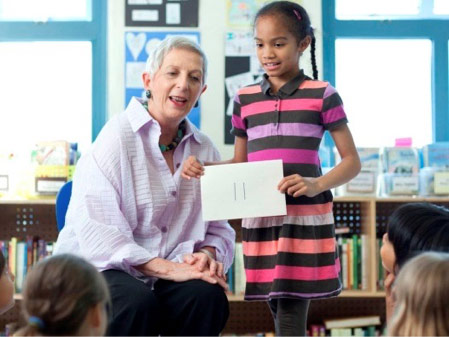 I helped out by first reminding the others that they were to guess two equations, giving her time to get comfortable. 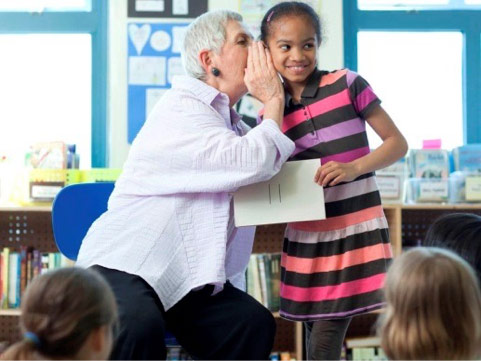 When someone guessed, she needed a little coaching from me about how to respond. 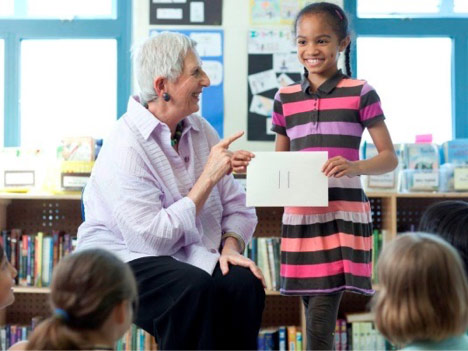 As difficult as this was for her, she did really well.

I sometimes ask students to choose their own numbers for riddles, but with this class, I asked them all to write a riddle for the number 11. I made one of those decisions that we as teachers make all of the time because of our particular students. It was a good decision for this class.

The activity can spread over several days, with a few students presenting their riddles at a time. It can be extended so that students write riddles for other numbers. It’s a wonderful lesson for differentiating so that students work with numbers that are appropriate for them. Some stick with numbers less than 20, others choose multiples of 10 up to 100, and some choose other two-digit numbers.

Using a Children’s Book in a Math Lesson
There’s a huge variety of books available that provide many opportunities for teaching math lessons. And while the books and lesson goals differ, I follow the same guidelines when planning these lessons:

Choosing Books for Math Lessons
One important aspect of incorporating children’s books into math instruction is making good choices about the books to use. I consider these three questions before selecting a book to use as a read-aloud springboard for a math lesson:
1. Is the book of high quality from a literary perspective?
2. Does the book present content that is mathematically sound and grade-level appropriate?
3. Is the book effective for helping students learn to think and reason mathematically?

A Final Tip
While the goal after reading a book aloud to a class is to launch a math lesson, I first allow time for students to enjoy the book. As with any read-aloud experience, I want students to savor the text and examine the illustrations. Sometimes I’ll reread all or part of the book, and I always provide the opportunity for class discussion about it. Only then do I shift the students’ attention to make the math connection. After the lesson, I make the children’s book available for students to revisit on their own or to check out to take home and enjoy with their families.