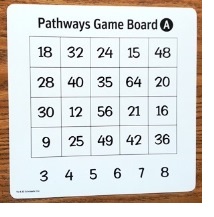 The Game of Pathways

Confusion typically occurs in the classroom when I teach a new game to students. I’ve learned to be patient as I help students become comfortable with what they’re expected to do, but I’m always looking for ways to reduce the confusion hump.

When I recently introduced fourth graders to the multiplication game of Pathways, I tried a new approach. I organized the rules into four phases, easing the class into how to play by starting with a simple version of the game and adding information in manageable chunks.

It worked! Here’s what I did.

Phase 1: Teach what a pathway is.
On the board, I drew a grid of four rows with five squares in each. 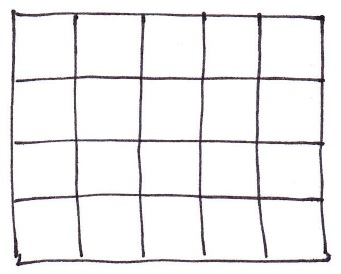 I told the class that I was going to teach a game that was sort of like Tic-Tac-Toe. (In this way, I was connecting new learning to something the students already knew.) I explained that this game was called Pathways.

I pointed to the grid on the board and explained, “To play, you take turns marking squares, trying to make a pathway on the grid, either from the top to the bottom or from one side to the other side. Whoever completes his or her pathway first is the winner.”

I gave additional information, “Two squares are considered to touch if they have a common side or a common corner.” I drew three more grids and illustrated some possible winning pathways.

Then I modeled playing the game with Sara Liebert, the class’s regular teacher. Instead of using X’s and O’s as we do for Tic-Tac-Toe, we wrote our initials in squares, each with a different color marker. We played several games to help the students see how pathways can be created. The students loved watching Sara and me play against each other. They offered suggestions, groaned when one of us made a move they didn’t like, and cheered when one of us won. (It’s important to play enough times for students to get the hang of what it means to complete a winning pathway.)

Phase 2: Introduce products into the game.
I reproduced the Pathways Game Board A, one of the five game boards available for playing the game. I enlarged it so everyone could see it and made two copies so I could demonstrate two games. I posted one copy on the board. 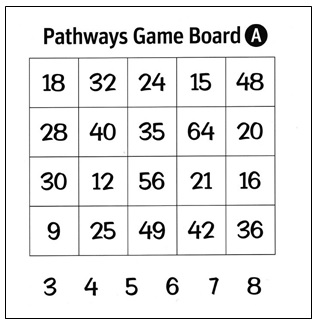 I introduced a new rule for playing on this game board, “You can mark a square on the grid as long as you can think of two factors that you can multiply to get the number in the square.” Students have multiplication tables available to them and were free to refer to them to help identify correct multiplication problems.

Hector asked, “What are those numbers at the bottom for?”

I responded, “We’ll ignore them for now until you feel sure you understand how to play the way I’ve described.”

Again, Sara and I played, engaging the students by having them suggest moves. They had lots of opinions. At times, we stopped and had them discuss what made sense to do next, and then we’d continue play. Also, we modeled recording a multiplication equation for each of our moves, preparing them for how they were going to play. 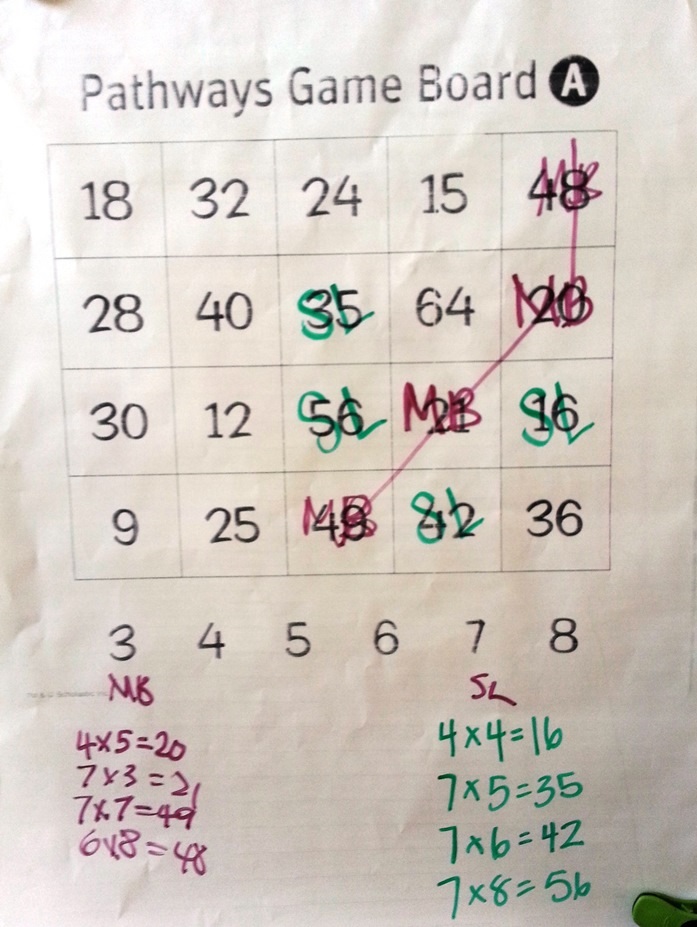 Phase 3: Introduce using factors for the game.
I asked them if they thought they were ready to learn another rule they had to follow in order to play Pathways. They were eager. “It’s about those numbers that Hector asked about,” I said, pointing to the row of numbers below the grid—3, 4, 5, 6, 7, and 8. “For this game board, those are the only factors you are allowed to use.” We looked at the multiplication equations we had written and agreed that Sara and I had made all legal moves.

Then I pointed to the number 40 in the second row of the grid. I asked, “What multiplication equations would allow me to mark the square with 40?” Hands shot up and I recorded their two suggestions—8 x 5 = 40 and 10 x 4 = 10. I then pointed out, “I couldn’t use 10 x 4 because 10 isn’t listed as a factor below the grid.” To be sure students understood so far, Sara and I played another game on the second copy I had made of the game board. The students’ involvement remained high.

Phase 4: Introduce the final rule about selecting factors
“There’s one more last part to the rules,” I said. “The first player chooses two numbers from the row of factors underneath the grid, marks the square with the correct product, and records the multiplication equation. Then, the next player has to use one of the factors the first player chose, change the other factor to a different one, mark the square with the new product, and record the multiplication equation. Each time you play, you have to use one of the factors from the previous play and change the other.”

It was the end of the time for math, so we told the students we’d start the next day with them playing the real game in pairs.

Day 2
The next day, Sara explained to the students that they would play in pairs. She showed them the materials they would be using, 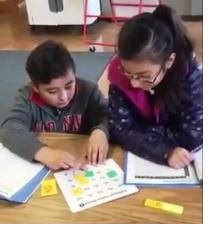 which included Pathways game boards, green and yellow tiles to place on products, and two paper clips that they would use to mark the factors as they chose them. She showed them the five different versions of the game boards, pointing out that the factors and products were different on each of them. And she had two students play as the others watched to help everyone understand what they were to do. When the students were seated with their partners, Sara circulated, giving support as needed. 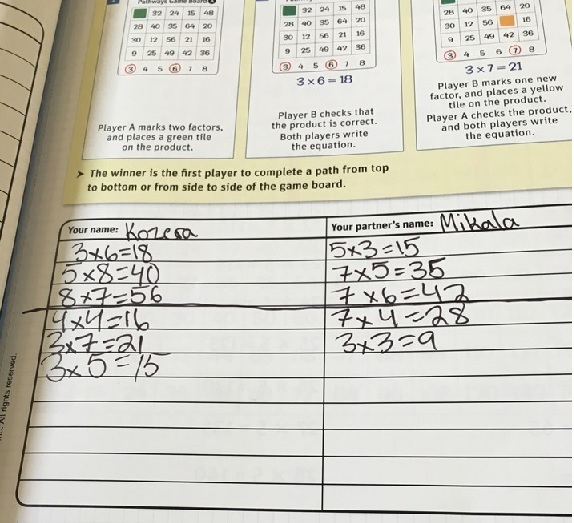 The students were completely involved playing. Because there was an odd number of students in class, Sara put three together and had two play against one. It worked fine. Here the two paired together gave each other a high five for winning a game. 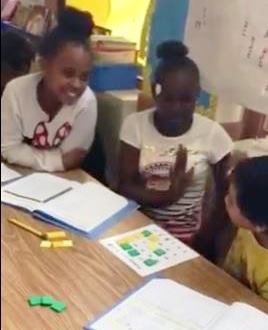 Pathways is included in the Do The Math intervention program in Multiplication, Module B, with sturdy game board cards, tiles, and recording sheets. The game with reproducible game boards is also included in Teaching Arithmetic: Lessons for Extending Multiplication, Grades 4–5, a Math Solutions resource that I wrote with Maryann Wickett.