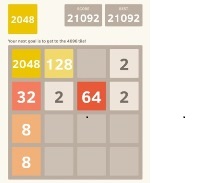 The game of 2048 is a free app for iPhones and Android phones. When you begin a game, you see a 4-by-4 array of square tiles. A few tiles have numbers on them—always 2s and 4s—but most of the tiles are blank. 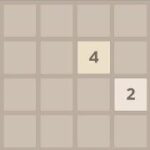 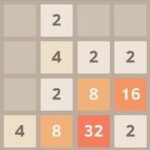 I found the game easy to play but also vexing.

Two weeks after her first email, Sandra wrote in another message, “Made it!” And she attached a screenshot of her completed game showing the 2048 tile. (See the photo at the beginning of this post.) By the time I received Sandra’s victory message, the greatest number I had managed to produce was 512.

According to Wikipedia, after the game of 2048 was released in March of 2014, it received four million visitors in less than a week. I mentioned the game to my three grandchildren who live nearby. Two of them had been playing it on and off. “I figured you already knew about it since it’s a math game,” Charlotte, a tenth grader, told me. I confessed to them that I wasn’t having much success with getting past 512. Jeffrey, a fifth grader, was sympathetic. He told me, “I keep getting stuck when I can’t move the tiles to get the numbers that match next to each other so I can double them.”

The next week I talked with Charlotte again about the game. She told me that she was able to get a tile with 2048 on it fairly regularly. I asked for tips about how to swipe, and she gave me simple, clear, and effective advice, demonstrating on my phone. I followed her advice and now have gotten to 2048 several times.

Once you reach 2048, you have the option of continuing to play and trying to get to 4096 and beyond. I haven’t had any success with that. Yet.

So, how did the game of 2048 help me think more about teaching math and my ongoing quest to improve my classroom teaching practices? I think that playing 2048 is a learning challenge that embodies the qualities I strive for in math 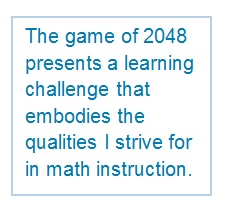 instruction. The game presents a problem situation to investigate―to get to 2048. It’s accessible to a wide range of abilities―getting started is easy. It allows for differentiation―there are different levels and ways to engage. (And a 5-by-5 version of the game, 2048 Extreme—also available as a free app—makes it easier to be successful and was more fun for Jeffrey). The game encourages looking for regularity and structure―you strive to figure out how to make more effective swipes. It provides the opportunity to make and test conjectures―you have many opportunities to test your ideas about making more effective moves.

The game of 2048 inspired me to solidify the qualities that I dream about for math lessons. I’m always on the search a classroom investigation that

P.S. Friends have told me that the game of 2048 is based on the game of Threes, another to try. I haven’t yet. I don’t need one more addiction right now.

Classroom Suggestions
My granddaughter Charlotte made the assumption that I already knew about the game of 2048 because it was a math game. And while it’s true that the game involves numbers, it’s also mathematically interesting because it embodies important mathematical practices—making sense of a problem and persevering to solve it, and looking for and making use of structure. At first I didn’t think of the game for classroom instruction, but on reflecting I think it would be worthy as an investigation itself and also as a springboard for talking about the doubling pattern that leads to powers of two.