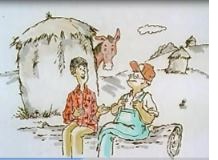 Steven told me that he was given this problem during a corporate training session to encourage problem solving and collaboration among managers:

A man bought a horse for $50 and sold it for $60.
He then bought the horse back for $70 and sold it again for $80.
What’s the financial outcome of these transactions?

He explained how the session was organized. People were first asked to think about the answer individually. After they had time to think on their own, the facilitator asked for answers and listed them. The facilitator then identified a different location in the room for each answer offered. He

asked people to go to the area he designated for their answer, compare their reasoning with the others who agreed, and select a spokesperson to present a convincing argument for those in other groups. As arguments were presented, anyone who became convinced of a different answer was free to leave the group and join another. The goal was to see if everyone would wind up in the same group, convinced of the same solution. The kicker was, Steven told me, only then would they go to lunch.

Hmmm, sounds like the Common Core Mathematics Practice Standard 3 in action: Create viable arguments and critique the reasoning of others. And the organizational structure relates to the classroom instructional practice of think, pair, share.

I was intrigued by the Dealing in Horses problem and have used it many times since then. I also included it when making a video for parents: Mathematics: What Are You Teaching My Child?  The parents in the video gave a variety of responses. Take a look at this clip.

I was also intrigued with the organizational structure used in the corporate training session, and I’ve used it with classes from grade 2 through high school, in professional learning sessions, and with parent groups. Also, I included the problem in About Teaching Mathematics with specific teaching suggestions.

The organizational structure reminds me of what I’ve read in a book I’ve owned and loved since the 1980s―Thinking Mathematically by John Mason with Leone Burton and Kaye Stacey. There’s lots to love about this book (I did an internet search and copies are available), and one thing that has stuck with me over the years is the advice for justifying your thinking: convince yourself, convince a friend, convince a skeptic. I think that think-pair-share is another version of this advice.

So, back to the horse problem: Do you have an answer that you’re convinced about? If you haven’t thought about it yet, I suggest you stop and do so.

Why I Like the Horse Problem So Much
Understanding the situation is not the difficulty with Dealing in Horses—the scenario is clear. Adding and subtracting the numbers in the problem also is not difficult—the numbers are easy to handle, even mentally without having to rely on paper and pencil. Yet deciding precisely what to do with the numbers isn’t obvious to everyone. The difficulty lies in knowing how to choose appropriate arithmetic operations for the situation at hand in order to arrive at a correct solution. The confusion that adults experience with this situation is similar to the confusion that students experience when presented with a page of mixed word problems that leads them to ask: “Do I need to add or subtract?”

Classroom Suggestions
Most recently, I presented the Dealing in Horses problem to a class of seventh graders. I first asked if there was more than one correct answer and they agreed that the problem has to have one right answer. Then here’s what occurred.

Ah, there’s no answer book for most real world problems.