Race for 20―A Counting Game for All Ages

Race for 20 is a game that works for all ages, from young children who can count to 20 to adults who haven’t yet thought about the game.

Young children benefit from the game because it gives them experience with practicing counting, taking turns when playing a game, learning how to win (or lose) gracefully, and enjoying the interaction with a sibling or parent. All good.

Older kids can engage with the challenge of figuring out a winning strategy for Race for 20 and playing variations on the game. (See below.)

Adults have the opportunity to engage with a mathematical subject that has often been relegated to graduate mathematics. (Read more at the end of the post about this.)

Here are the rules. (The rules in Spanish are at the end of the post.) 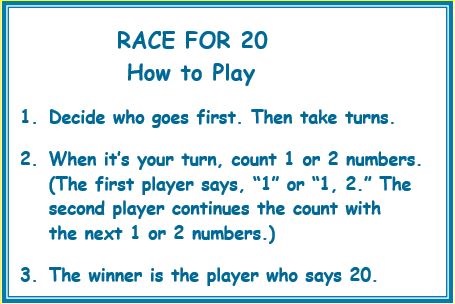 Need a Version That’s Easier?
Try Race for 10. Same rules, you count 1 or 2 numbers on your turn, but you have to land on 10 to win. (It’s not really easier, but it’s a shorter game with less to keep track of.)

When a Child is Shaky at Counting
Some young children get stuck from time to time when counting, especially with numbers in the teens. For these children, it helps to write the numbers from 1 to 20 on a piece of paper to help keep track. Better yet, ask the kids to write the numbers. Then players point to the numbers as they count.

Making the Game More Concrete
Use 20 counters. I like using 19 pennies and 1 nickel. Players take turns taking 1 or 2 pennies. (That’s the same as counting 1 or 2 numbers.) Important: Players can’t take the nickel unless it’s the last coin remaining. (For a little extra math, first have them figure that 19 pennies and 1 nickel add up to 24¢. Then, after a game, count how much money you each have and check that you have 24¢ together.)

Can Three People Play?
Yes, three people can play, but it changes the challenge of figuring out a winning strategy. I’ve found it better for two to play at a time, with the third playing the winner. Players can keep track of how many games they win.

Need a New Version of the Game?
Ah, there are so many ways to vary the game. Here are some, but kids can think of others.

Race for 21
Same rules with one tweak: The winner lands on 21. This is perfect for kids who have cracked the strategy for winning Race for 20.

Race for Whatever, Count Any Number
Have kids decide the rules. Here’s a prompt where they can enter a number for the landing number and for how many to count on each turn: Race for ___, Count ___ Numbers.

Integrating Writing into the Learning
For me, writing is how I work my way into a subject. That’s what I had to do to create this blog and what I have to do whenever I write for kids, parents, and teachers. Writing is a way for children to organize and synthesize their mathematical thinking while polishing their writing skills. Try a how-to writing assignment for kids, maybe How to Play Race for 20 or How to Win at Race for 20

Finally, Some Tips
1. Don’t force the game. I’ve had kids for whom the game is just too risky. That’s when I might try a shorter version, like Race to 10. Or I might provide counters for playing, like 19 pennies and 1 nickel.

2. Don’t insist on kids playing variations. I’ve had some kids who will play Race for 20 over and over, but resist changing the rules. Or they’ve just had enough with the original game. That’s fine. I’m all for giving children as much agency as possible in their learning.

3. Don’t reveal a winning strategy, even if you’ve figured it out. Once you have the strategy, the game no longer has any challenge. Besides, knowing the winning strategy is only as valuable as being able to apply that information to a new but related challenge.

About the Mathematics
This game fits into the mathematical study of Game Theory, which is often studied at the graduate level for math majors. Honestly. Race for 20 fits into the category of the game of Nim. For more information, there’s lots online. Here’s a definition of Game Theory that I’ve cobbled together from a slew of online choices:
Game theory is the study of how and why people make decisions. It is the branch of mathematics concerned with the analysis of strategies for dealing with competitive situations where the outcome of a participant’s choice of action depends critically on the actions of other participants. Game theory has been applied to contexts in economics, business, and biology. 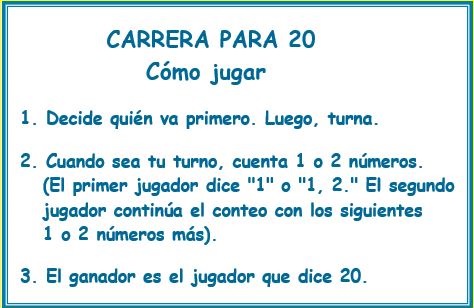