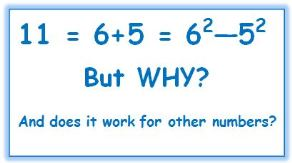 Postscript about the Number Eleven

This morning, I read a comment posted in response to my recent blog, Eleven Things about the Number Eleven. MQ referred to the very last entry in the extra page of math facts about 11 that I printed separately and rolled into a scroll to accompany the book I made for my grandson’s birthday. 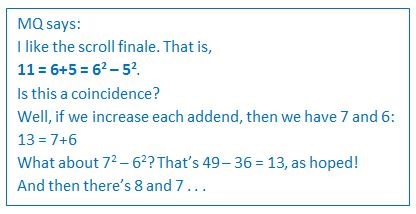 I had found this math fact about 11 on the internet when I was creating the book. While it caught my interest enough to include it, I didn’t think more about it. But now I was curious.

I tinkered some with other pairs of numbers, as MQ did. For every pair of numbers I tried, where one number is 1 more than the other, the sum of the numbers was equal to the difference of the squares of the numbers.

To think about this, I made a sketch. 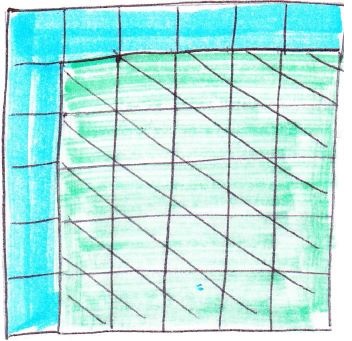 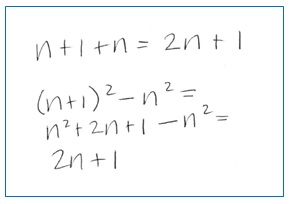 In the spirit that writing is how we work ourselves into a subject and make it our own, writing this blog has helped me make sense of why the math fact I included in my grandson’s book holds true for all pairs of consecutive numbers.

But I realize that this blog might be useless to others reading it. What I’ve done is given an explanation that falls into the category of “teaching by telling,” which I avoid in the classroom when I want students to “uncover” knowledge that’s based in understanding relationships. This is in contrast to when I feel I need to “cover” material that’s based in social convention, not logic. (For more about this, read the comment I posted on Dan Meyer’s provocative blog, An Advocate of Explicit Instruction Experiences the Limits of Explicit Instruction.)

I know I’m rattling on a bit. But I needed to share my excitement at making a new math discovery.