One of My All Time Favorite Games

Here are some reasons why I’ve written this blog:

The Two-Dice Sums Game meets all of these criteria. It’s one of my long-time favorite games that I describe in detail in my soon-to-be-available new book, Welcome to Math Class. But I never stop tinkering with lessons. In this blog, I describe how I taught the game again to a class of second graders, tweaking a few aspects  of the lesson, and then used the game as an opportunity for seventh graders to communicate with the younger students. It’s all about continuing to learn as a teacher.

INTRODUCING THE TWO-DICE SUMS GAME IN GRADE 2
Beginning with a Number Talk
I gathered the second graders on the rug for a number talk about the sums possible when rolling two dice. The students were familiar with using dice to play games. “What’s the smallest sum we can get?” I began. Most knew that it was 2 and it came up when rolling 1 on both dice. “And what’s the greatest sum possible?” I asked. Most knew it was 12. I listed the numbers from 2 to 12 on the board and we talked about whether all of the numbers from 2 to 12 were possible. (This wasn’t obvious to all of the students and it was a good opportunity for them to think about pairs of addends from 1 to 6 that add to each number.) After I recorded all the addition combinations they identified, we counted the numbers from 2 to 12 to see that there were 11 possible sums. 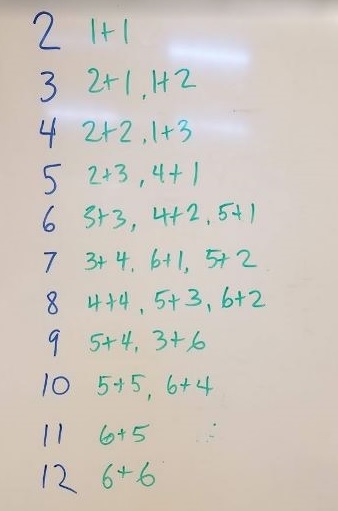 Distributing Number Strips and Cubes
Next, I showed the student the strips of paper I had prepared with the numbers 2 to 12 on them, the possible sums from rolling two dice. I had placed the numbers far enough apart so students could place cubes on them. I explained, “I’m going to give each of you a strip and 11 cubes. Put the cubes on the numbers anyway you’d like. You may put one cube on each number, stack them all on one number, or arrange them any way you’d like.” I modeled some options with a number strip and cubes and then distributed the materials.

Some students arranged the cubes on different numbers. Others placed all of their cubes on one number, usually their “favorite” number.

I didn’t give the students any more information at this time. Sometimes I explain more of the game so students might think about how to arrange the cubes, but with these younger students, I felt that it was best first to make sure they understood how to place cubes. Some students went back to their desks and others remained on the rug. Students arranged their cubes in a variety of ways. It’s typical for students to place one cube on each number. (This happened but I didn’t take a photo of any of those arrangements.)

Explaining How to Play
After all students had arranged their cubes, I explained the game rules. I said, “I’ll roll two dice and call out the sum that comes up. If you have a cube on that sum, you may remove it. If you have more than one cube on the number, you may only remove one of the cubes. If you don’t have a cube on that number, then wait until I call out a new sum. The winner is the first person to remove all the cubes.”

I had a few of the students repeat the directions. (I generally do this when giving directions and find it’s helpful to clear up confusion.) Then, before beginning to play, I said, “If you’d like, rearrange your cubes. Once we start playing, you’re allowed to remove a cube if I call the number it’s on, but you’re not allowed to rearrange them.”

A question: How would you arrange the cubes to have the best chance of being the winner?

Playing the Game
As we played, the students were engaged and excited. There were cheers and groans each time I rolled the dice and called out a sum. I monitored to be sure students were playing correctly.

When I noticed that some students were close to winning, with only two or three cubes left to remove, I interrupted the game. I asked students to report the sums they were waiting for. Everyone seemed surprised that while there were differences, all of the students who reported mentioned the same sums―2, 11, and 12.

I then continued the game until we had a winner.

“Let’s play again,” I said. I added, “You may want to place your cubes on different numbers this time.” Some did and some didn’t. After a few more games, I was satisfied that they all understood how to play.

Playing Independently
I added The Two-Dice Sums Game to the math menu as an option for partners and the game was a popular choice. (For information about math menus, read Using Math Menus: Some Nuts and Bolts.)

The students were all engaged by the game and played multiple times.

As students played the next several days, some began to think more strategically about how to place the cubes to have a better chance of winning, using their experience and intuitively engaging with the likelihood of the possible sums. Other students seemed to continue to arrange cubes randomly or would cling to their “favorite number” strategy. All were getting practice with adding numbers from 1 to 6.

Some students thought strategically about how to place cubes while others clung to their favorite number.

TEACHING SEVENTH GRADERS
Not long afterward, I worked with a class of seventh graders learning about probability. While I used the game with the younger students to help prepare them for later studying probability, I was interested in providing the seventh graders opportunities to investigate chance, make conjectures, and develop and use probability models. I introduced a variety of activities with dice and also engaged them with a menu of probability explorations. 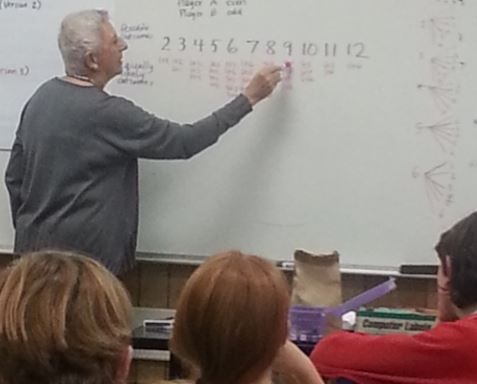 After the 7th graders had played various two-dice games, we analyzed the different ways each sum can result.

I didn’t initially include The Two-Dice Sums Game on the menu for the seventh graders. I waited until after they had formed some ideas about probability related to two dice and then explained The Two-Dice Sums Game I had taught to the second graders. We played the game and talked about how to arrange cubes to have a better chance of winning. The seventh graders were as interested and engaged in the game as the second graders! 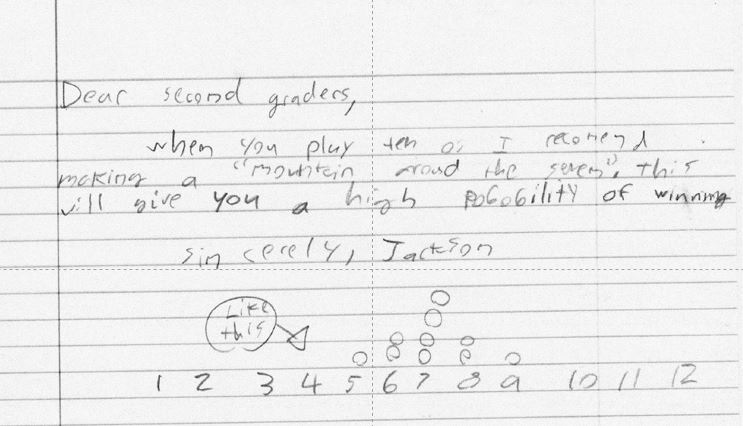 This student shows understanding about the probabilities of different sums when rolling two dice.

This student also shows understanding and suggests the number of cubes for each sum. 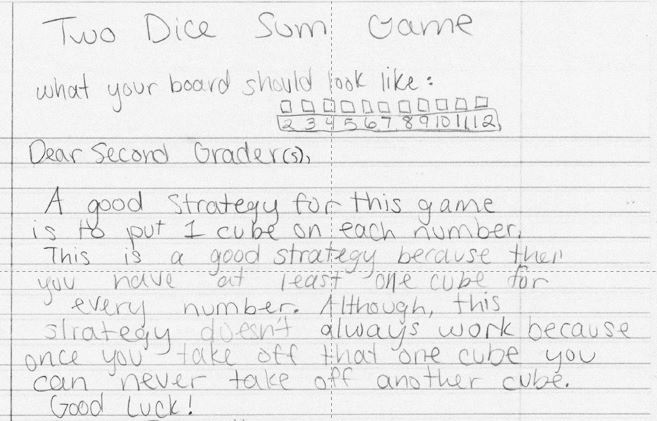 The advice in this letter doesn’t show mathematical understanding of the probability of sums.

The suggestion in this letter is to learn from past experiences, an empirical approach.

FINAL COMMENTS
This blog includes several changes from the way I described the game in my most recent book Welcome to Math Class. About the changes: Instead of giving students counters, my colleague Lynne Zolli prefers having students use interlocking cubes that they can stack up on their number lines. (That’s what you see in the photos above.) I tried her suggestion and liked how it worked. Also, this is the first time that I had older students write about their experience, which not only was beneficial for them to reflect on their strategies but also helped the younger students. 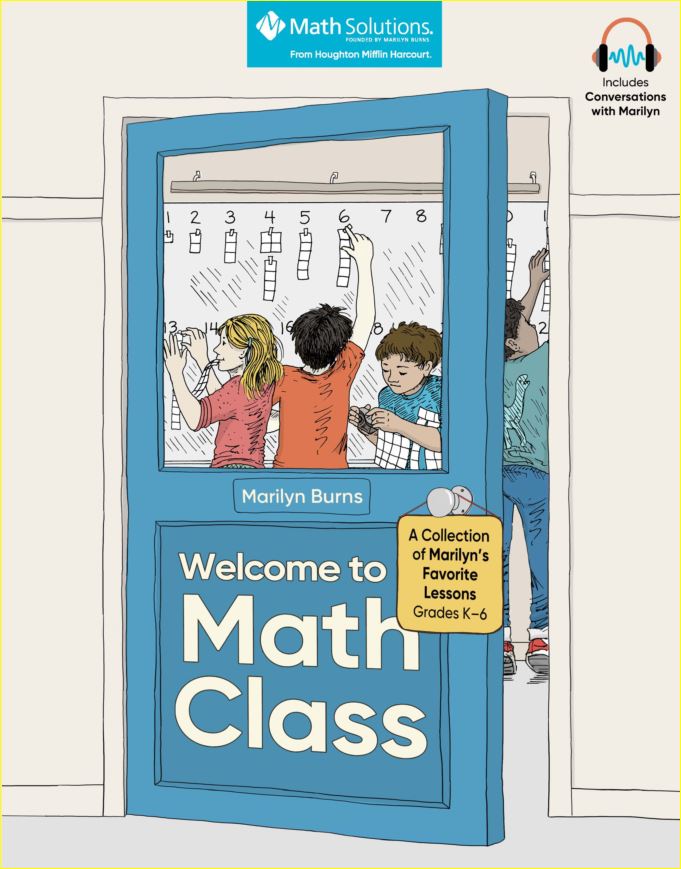