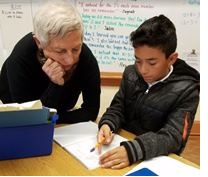 The fourth graders at John Muir Elementary School in San Francisco were engaged in a unit on division of whole numbers. I planned a lesson to build on what the students’ regular teacher, Sara Liebert, had been doing and was planning to do. My lesson plan had two parts―first a number talk and then a problem-solving assignment. I made a teaching mistake in each part.

The mistake in Part 1 was actually fortuitous as it revealed something important to Sara and me about the students’ understanding. The mistake in Part 2 was a not-so-useful mistake, an error in judgment that isn’t irrevocable but that I wish I had avoided. 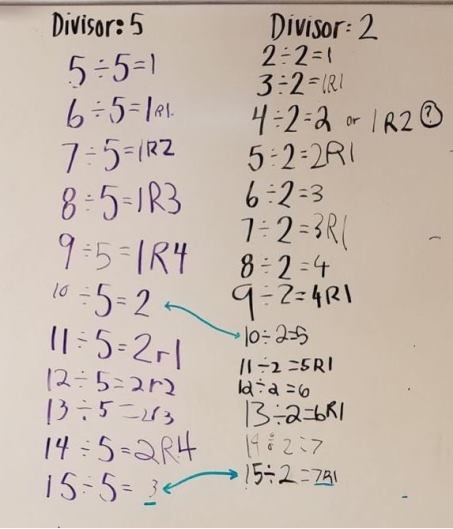 When I arrived at class, problems with divisors of 5 and 2 were still on the board from the math talk that Sara had led the day before. The week before, Sara had led a similar number talk with the divisor of 4. The intention for these number talks was for students to solve division problems, look at the patterns that occurred with the answers, and make conjectures about what was happening with the remainders.

I had planned a number talk to replicate the experience but with the divisor of 3. Sara and I were interested in students’ thinking about how the patterns they had noticed and the conjectures they made for division problems with divisors of 4, 5, and 2 applied to a new set of problems.

An Aside: A Note about “Silent Math”
Sara used a “silent math” routine for the division number talks. The students are familiar with the protocol: After the teacher draws a star on the board, no one talks. Not even the teacher. And then, when the teacher erases the star, the class discusses what occurred. This “silent math” routine is useful for encouraging students to focus visually on what’s on the board without the distraction of hearing from others. It’s a change from the “think, pair, share” protocol that we typically use. Here, Sara would point to a problem, give a marker to a student to come up and write the answer, and then indicate (nonverbally) whether the answer was OK or not. When an answer wasn’t correct, the student had the choice of changing his or her mind, or passing the marker to a classmate for help.

I planned to lead the number talk using the “Silent Math” protocol.

The “Lucky” Mistake
I drew the star on the board to signal that there shouldn’t be any more talking. Then I wrote Divisor 3 to the left of Divisor 5, and I listed the problems I wanted the students to solve.

I had thought the number talk would be one of those slam dunk experiences, a warm up that would give students the opportunity to revisit patterns and conjectures. Hah! It seemed that beginning the list as I did completely threw some of the students under the bus. No one objected. (Remember the silent star?) I completely missed that some students were perplexed until a few students make errors and I noticed hesitancy as they wrote answers. 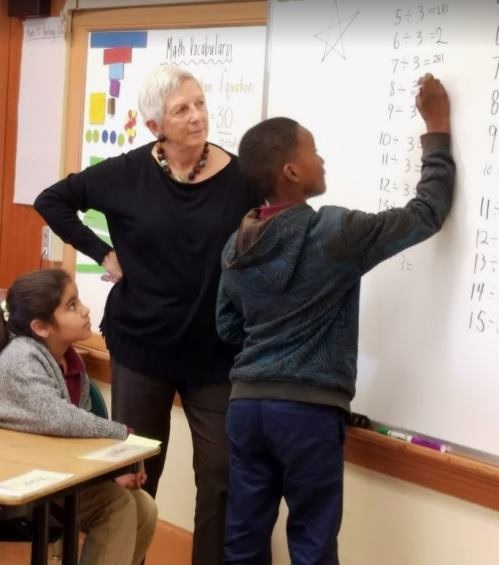 After limping through the first three problems and watching two students write incorrect answers for 8 ÷ 3 =, I pulled the plug and erased the star.

On the board, I wrote the two answers that students had given for 8 ÷ 3 =. One student volunteered another possibility, so now there were three possible answers. 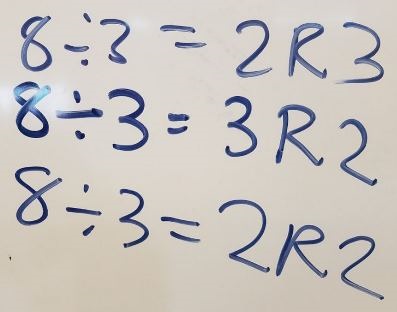 This was really important for Sara and me to observe. It helped us realize the fragility of some students’ understanding and the strength of others’ understanding. After the students talked in pairs and several explained their reasoning, I wrote 2R2 as the correct answer to 8 ÷ 3. Also, I revised the list of problems, writing 3 ÷ 3 = and 4 ÷ 3 = at the top, and talked about their solutions. Then I again drew a star on the board, and we continued. 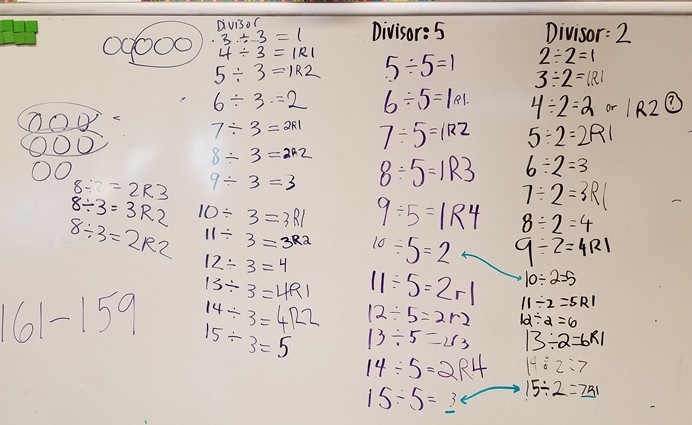 Here’s the board when we finished the number talk.

Why I Thought the Mistake Was “Lucky”
It’s all too easy to make incorrect assumptions about what students understand. Getting a clear message as we did during this silent number talk reminded us of the need to provide more experiences for students to solve what we had thought were simple division problems. It was interesting in the discussion to hear students’ ideas. To figure out answers, some relied on the Circles and Stars game they played when learning multiplication. Some used a grouping interpretation (for example, for 8 ÷ 3, making groups of 3 to figure out there were 2 groups possible with 2 remaining) and some used a sharing interpretation (sharing 8 among three groups equally, figuring out that each group would have 2 and there would be 2 remaining).

Part 2: The Problem-Solving Assignment
I was a bit shaken by the students’ difficulty with the division problems in the silent math number talk. But I chose to continue with Part 2 of the lesson with the Four Ways assignment I had planned. This also focused on division, not with “naked number” problems but instead with division problems in contexts. Again, the focus was on remainders. The students were to solve the same numerical problem in four different contexts and interpret the remainder for each.

I’ve used this assignment before, always giving the problem 21 ÷ 4 and asking students to solve it in four different contexts:

I think of this as a “low threshold, high ceiling” assignment. I chose numbers to make the problem numerically accessible, instead making the focus interpreting the remainder in different contexts. 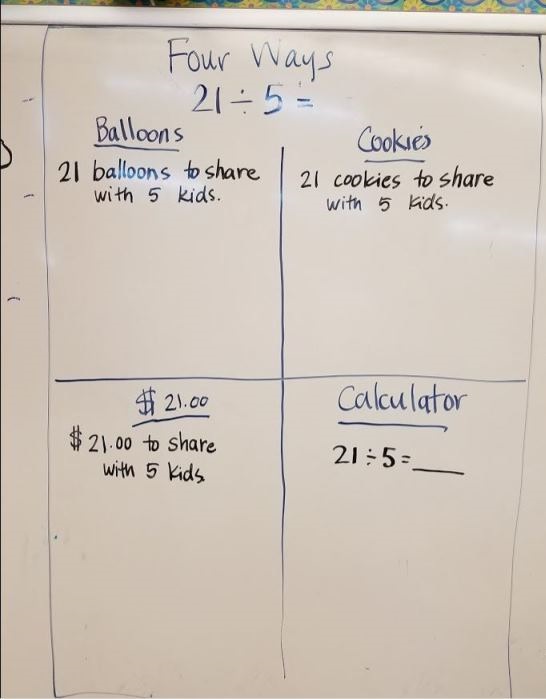 Making the change to 21 ÷ 5 was NOT a good idea. It turned out that this wasn’t a mere procedural mistake but rather an error in judgment. It’s hard to teach and think at the same time, I know, so I don’t want to beat up on myself. But here I completely ignored why I had originally and very intentionally chosen the problem of 21 ÷ 4. (More about that below.) When presenting problems to students, the numbers matter!

That said, the students plunged in and went to work. They are hard workers and give their all when solving problems. 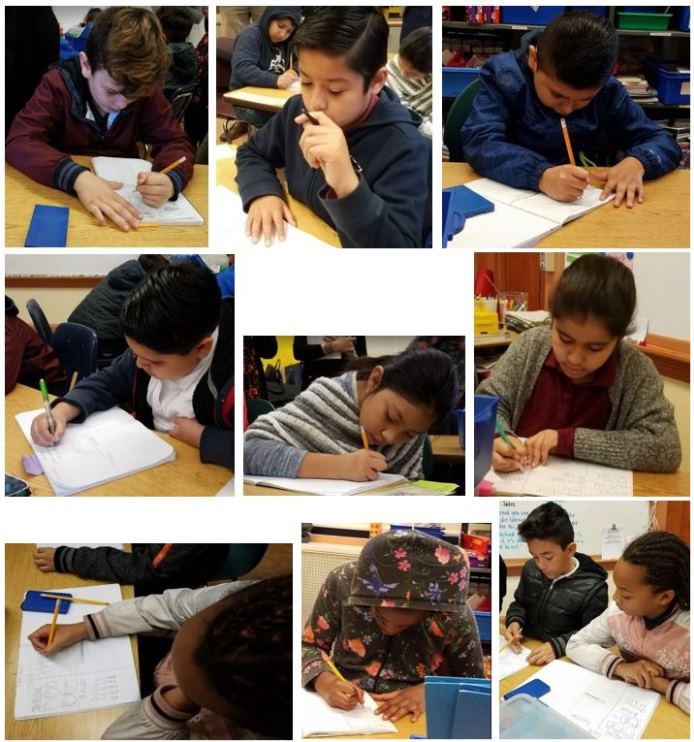 Most students chose to work by themselves but a few worked in pairs. They have this choice, though they each have to produce their own work. 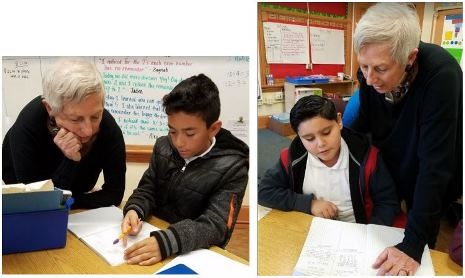 As I circulated, I gave assistance and encouragement.

Why I Thought This Was “Not-So-Lucky”
Yes, the problems with the divisor of 5 were on the board as a reference, but the list didn’t extend past 15 ÷ 5. Also, the problem of solving 21 ÷ 4 was just as numerically accessible for these students as solving 21 ÷ 5. About sharing the extra cookie: they had more experience dividing a cookie into four equal parts by dividing it in half and then half again. Not so with sharing a cookie into five equal parts. And 21 ÷ 4 has the valuable advantage of relating more easily to money (think “quarters” for sharing $1.00 among four kids) and therefore to the calculator answer of 5.25.

It was not just an unlucky mistake to change the problem to 21 ÷ 5, it was an unfortunate error.

The error was especially evident when the students used calculators. By the time they got to this last of the Four Ways problems, they knew that there was a remainder of 1 balloon, 1 cookie, and $1.00. Also, they had no formal instruction yet about decimals, and when they used a calculator, they had no way to make sense of the calculator answer of 4.2. They thought that the calculator was reporting a remainder of 2! Even those who had figured out that sharing the extra $1.00 resulted in each kid getting 20 cents couldn’t relate that to the .2 on the calculator display. 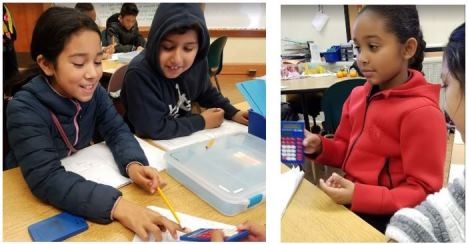 At this time, more students turned to one another for help figuring out what was happening. The conversations were more lively than mathematically useful.

Students remained confused about the calculator answer, others almost outraged, wondering if the classroom calculators were broken. I gave one pair of students my phone so they could use its calculator, and that gave them pause when it, too, produced the answer of 4.2. 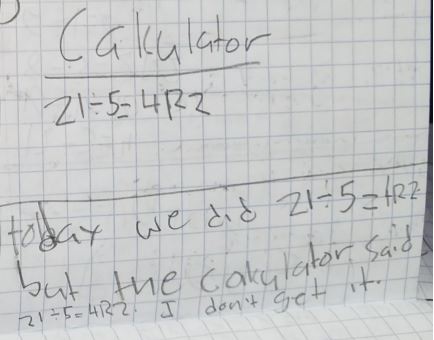 Students were sure that the remainder was supposed to be 1, so why didn’t the calculator show that?

What We Plan to Do
Clearly, we need to work on helping students interpret remainders. We learned that students can take word problems, like sharing balloons, brownies, and money, and decontextualize them to find answers. But they still need to think about recontextualizing the problems they solve and interpret remainders other than reporting them as “R” numbers. We plan to do more with money so that students become more comfortable using 25 as a benchmark when they compute mentally, and relate 25 cents to quarters. Then, we plan to revisit the Four Ways problems with the original numbers, 21 ÷ 4, and see what results we get.

An Afterword
Sara and I talk regularly to collaborate on lessons and I visit the class on an irregular schedule. When I come to class, sometimes I teach, sometimes I observe Sara teach, and sometimes we teach together, bouncing ideas back and forth as a lesson progresses.

For this day, the plan was for me to take the lead teaching. Guests were visiting for the day, the current cadre of Heinemann Fellows. (If you don’t know about the extraordinary Heinemann Fellows program, check it out.) That meant there were almost as many adults as children in the class during the lesson. I don’t mind being observed when I teach, but I admit that it’s always a bit, well, different. Maybe I’m not as relaxed? Maybe I worry a bit more about how the lesson will go? I guess it’s sort of similar to having guests for dinner when I’m extra careful and give special attention to straightening up in the house, setting the table, and preparing the meal.

During the lesson, we asked the guests each to focus on one or two students and see what they could learn about what the students understood and were experiencing. We had the luxury of spending an hour after class talking about the lesson and the students. The experience was wonderful for me, even with the two pedagogical mistakes I made. The Heinemann Fellows were gracious and inquisitive, and their feedback was useful. Wouldn’t it be wonderful if we always had that opportunity to learn from others about how to improve our teaching?