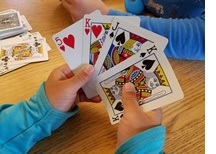 My colleague Lynne Zolli and I have been working with two second grade teachers who teach nearby. We met them when Katherine taught my youngest grandson (then a second grader and now a seventh grader) and we “borrowed” her class to try out a lesson. It’s been a fine arrangement―Lynne and I continue to borrow their classes to test new lessons and individual math interviews, and they pick our brains for ideas.

Katherine and Brooke regularly incorporate math games into their instruction. Each Monday they teach a new game that the students play with their families for homework during the week. They also add the game to the class Math Menu. (If you’re interested, check out my previous blog, Using Math Menus.) Recently Lynne and I planned to visit on a Monday, and Katherine and Brooke asked for a suggestion for the week’s game that would give their students practice with addition strategies.

A Suggestion for a Math Game
I searched through books on my shelf and chose the game of Oh No! 99! from Math Workshop Essentials, a wonderfully useful and readable resource written by Rusty Bresser and Caren Holtzman. In the book, they explain the game and include a vignette describing how Caren taught the game to fifth graders to provide them mental addition practice that many still needed and how she extended it to push their thinking further.

Even though the resource is targeted for grades 3 through 6, I thought the game would work with the second graders. It did, and it was a terrific lesson! 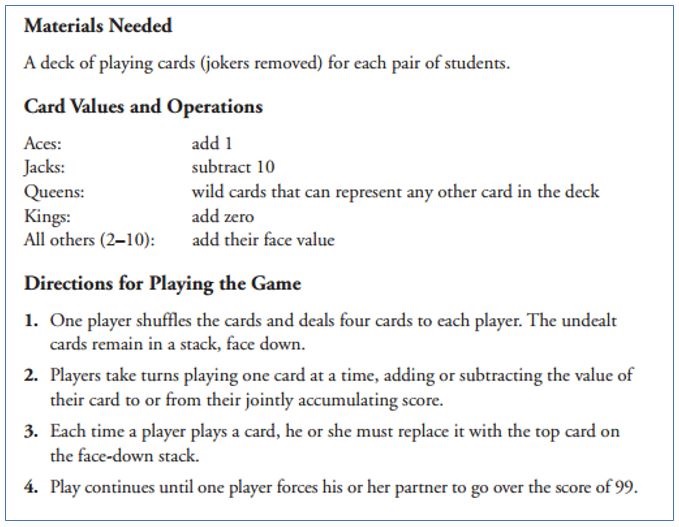 Prepare by Playing the Game First
When introducing any new game or activity, it’s important to try it first, and I recommend that you play Oh No! 99! before teaching it to your class. When we first tried following the rules, we weren’t exactly sure about what you could do with the Queens, and we thought that it would be important to clarify this for the students. We decided that when playing a Queen, you could add any number from 1 to 10. (In Rusty and Caren’s version, a Queen could also be used to add zero, like a King, or subtract 10, like a Jack. Both versions work fine. What’s important is that the students all play by the same rules and are clear about them.)

Playing helped us think about challenges that might arise and what we might anticipate as students played. It also helped us think about how we might structure a follow-up discussion. For example, we discovered from playing that the face cards were “good” cards to keep. We didn’t want to tell the students our ideas, but we wanted them to share and listen to each other’s thoughts about useful strategies.

Extra Support for Second Graders
Along with giving each pair of students a deck of cards, Katherine and Brooke also gave them a laminated 1–100 chart on which they could use a marker to keep track of the accumulating score. The chart was also a support for students who were less adept at adding mentally.

Two Different Ways of Introducing the Game
Brooke introduced the game by gathering the students on the rug, dividing them into two teams, and having each team move to one side of the rug so there was room to display cards in between. She explained the rules and selected students first from one team and then the other to choose a card and make a move. For this demonstration game, Brooke had both team’s four cards face up on the rug, but she told them that when they played, they’d each hold their own four cards in their hand so their opponent couldn’t see them. After playing the game twice, Brooke organized them into pairs to play. She also made the offer to any students who didn’t feel quite ready yet to play on their own to remain on the rug with her to play another practice game. As Brooke played with the students who needed more support, I circulated and offered help as needed. Not much was needed and the engagement was high.

Katherine introduced the game differently. She used the smartboard, chose one girl to be her opponent, and modeled the game for the class by playing with her. As Brooke did, she made the cards visible to everyone to engage them in suggesting possible moves, and she also explained that when they played with partners, they wouldn’t let their opponents see the cards they had. In Katherine’s class, Lynne worked with a pair of students that Katherine thought would need extra help, and Katherine circulated.

Ah, the luxury of having an extra person in the room. But don’t let that discourage you from trying this game. There’s always confusion when introducing something new, but the confusion is worth the effort.

What We Observed As Students Played
Observing the students as they play is useful as an informal assessment. As I circulated, I noticed some children reasoning in a variety of ways while others needed to count, either using their fingers or counting up on the 1–100 chart. When students added or subtracted 10, I looked for who just knew, who referred to the 1–100 chart to check the number directly above or below, and who used the 1–100 chart to keep track as they counted by 1s. 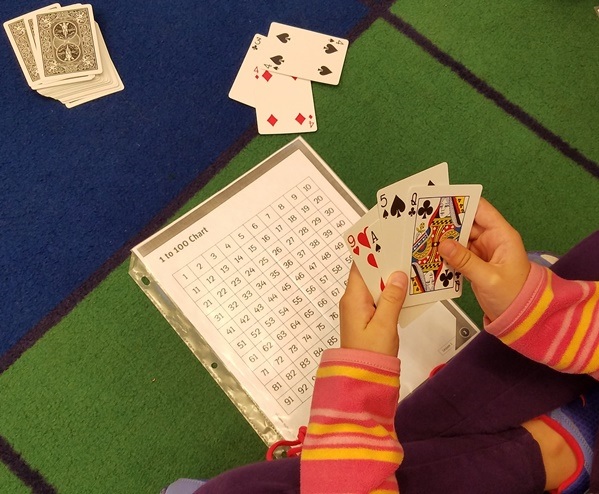 This girl kept the 1-100 chart close by, while others didn’t refer to it at all.

A Class Discussion
At the end of class, Brooke and I led a brief discussion. We asked the children for their ideas about the game. Some offered strategies: “Hold on to the Jacks.” “The Kings and Queens are really good cards.” Others had suggestions for improving the game: “Play so you can see each other’s hands.” One boy suggested, “Deal six cards instead of four so we have more in our inventory.”

Following Up with Number Talks
After class, Lynne and I talked about what might be a good way to follow up the students’ experience playing Oh No! 99! We thought about how Katherine and Brooke might use their morning number talks to focus on addition strategies, specifically on the strategy of “going to the next 10.” That night, I sent an email with two possible versions of number talks that connected to Oh No! 99! and would address this strategy, and also ideas to address strategies for adding 10 and adding 9.

Continue with other numbers, asking students to figure out the answers by “making a ten” and then adding on the extra. It’s OK to do the numbers out of order. The final board work might look like this:

A Number Talk Idea: Version 2
Structure the number talk so it more closely simulates the game. Start the same way as for Version 1: On the board write 38, and remind students about the game of Oh No! 99! Ask them to suppose that the number they’re up to is 38 and that a student plays this card. (Show the 7.) Ask: What would be the next number? (45) Then ask a student to explain how to figure it out by using the strategy of going to the next 10 (or 40). Record equations. Record the new start number, show another card, and continue.

It might be useful to repeat these sorts of number talks for a few days. Encourage students to use the strategy when playing and observe who is doing so and who may need additional support.

Two Additional Number Talk Ideas
It might also be useful to lead number talks that focus on adding 10. Linking to the 1–100 chart can especially benefit students who still need to count on by 1s when adding 10. And then it would be good to introduce the strategy for adding 9 by adding 10 and subtracting 1. Some students do this already. In a number talk, ask students to add 9 to several different numbers and record equations for two strategies: making a 10 and adding 10 and subtracting 1. For example:

Revisiting on Friday
I went back to school on Friday and on this visit spent time in Katherine’s class. The children love, love, love the game. Fewer students were using the 1–100 charts. 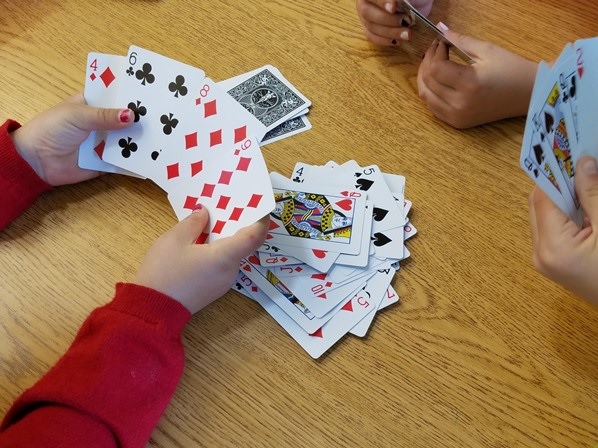 On Friday, Katherine had the students play in threes and it worked well. One boy told me it was even better because if the sum gets to 99, it could be the other person’s turn, and that person may have a Jack and bring the score down to 89, and then you’d still have a chance. 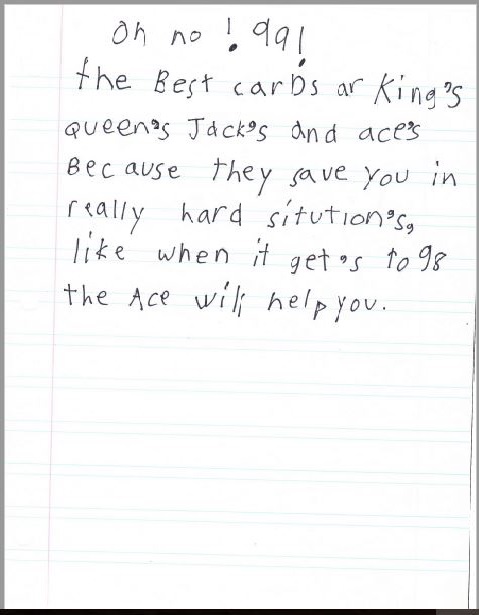 As children brought their papers up to me, I’d read them and often send them back to write more. For example, this boy first wrote: The best cards are kings, queens, jacks, and aces. I asked him to explain why they were the best cards and he added more to his paper. His paper shows his emerging understanding of when apostrophes are needed. 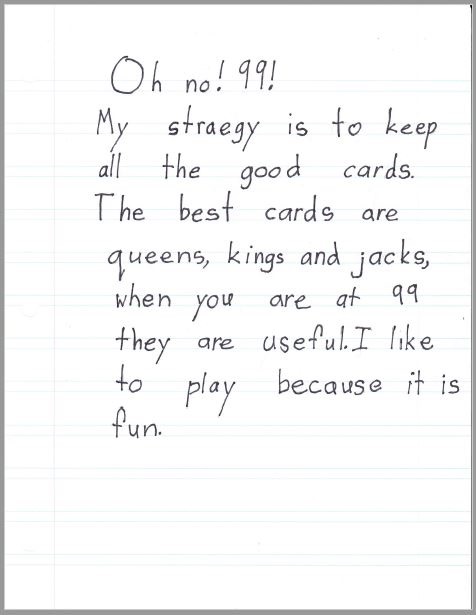 Some students, like this girl, used all three prompts when writing her paper. 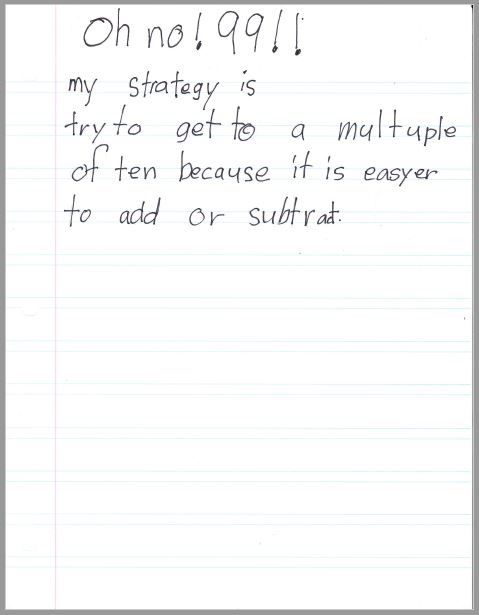 This student wrote about his idea for making adding and subtracting easier. 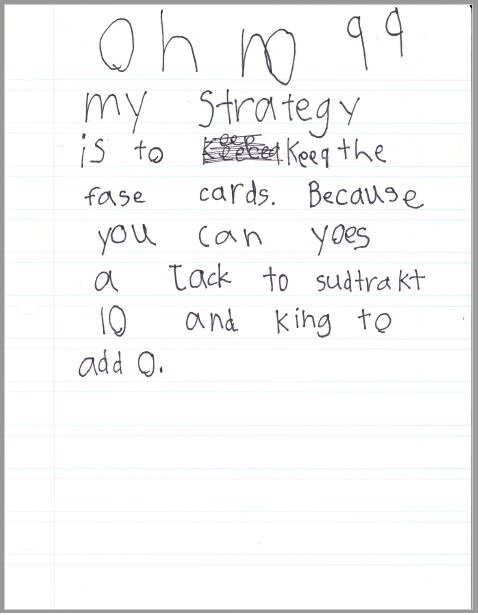 This student’s paper shows weaknesses in his writing but reveals that he had a firm grasp of a strategy for playing the game.

A Writing Assignment for Fifth Graders
When Caren taught the lesson in fifth grade, she gave the class this writing assignment:

Which card would you play? You can read samples of the fifth graders’ responses here.

A Last Note
The game is a version of O’NO 99, a commercial game that was brought to market in 1980 and is still available.