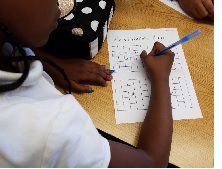 First a Caveat about Understanding vs Memorization
Years ago I had a conversation with Paul, a fourth grader. His class was studying multiplication and Paul’s teacher was concerned about him. She told me that he typically worked very slowly in math and “didn’t get much done.” I agreed to talk with Paul and see what I could learn. Here’s how our conversation began: 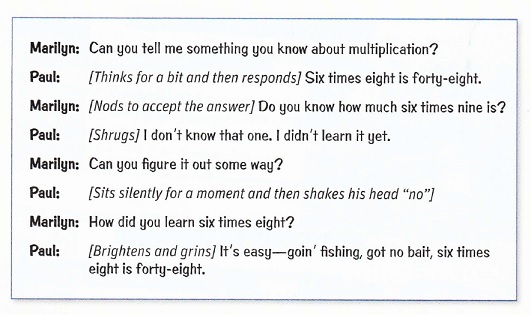 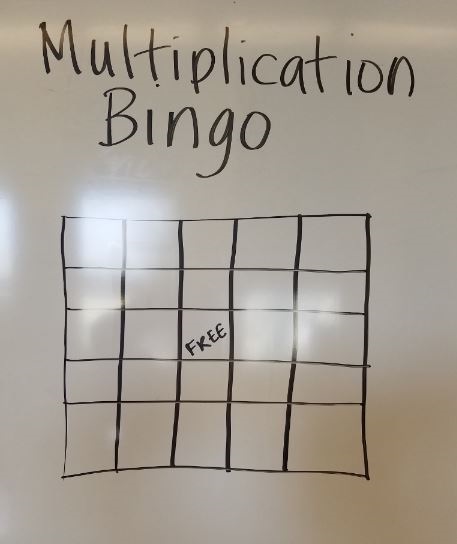 I showed the class two 1–6 number cubes and explained, “I’m going to roll these two cubes and we’ll multiply the two numbers that come up. If you have that product on your Multiplication Bingo card, you can cross it out. If the number appears more than once on your card, you can only cross out one of them. The winner is the first person to cross out five in a row.”

Then I said, “I think that 1 is the smallest product that can come up from rolling the two cubes. Who can explain why?” Hands shot up and a student explained that 1 was the smallest number on the cubes and 1 times 1 was 1.

I asked them to talk with their partner about what the greatest possible product would be. After a moment, I had them say the product out loud. There was a chorus of 36s and I asked a student to explain. Then I listed the numbers from 1 to 36 on a sheet of chart paper.

I distributed a worksheet to each student that had four 5-by-5 grids on it, each with FREE written in the middle box. 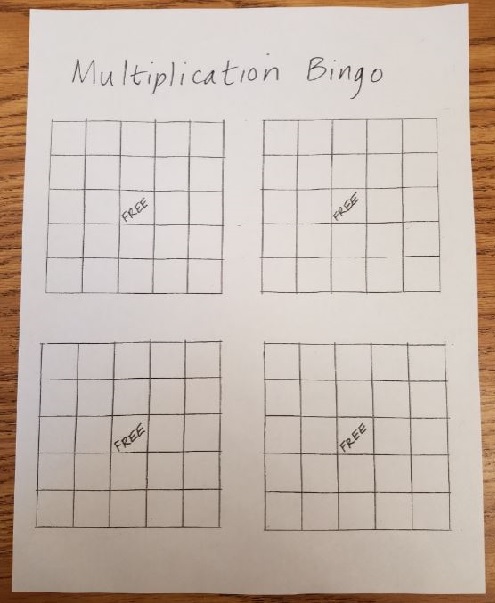 “Ready to play?” I asked. Several students pointed out that there weren’t any numbers on their cards.

“Not yet,” I said, “but that’s your job. You can fill in the first card with any numbers you’d like from 1 to 36. It’s OK to write a number more than once, but you have to write a number in each box except for the middle free box.”

As is typical whenever I introduce something new and students aren’t sure what they are to do, confusion erupted. I reassured

the students that this was just a first trial game, that we’d play three more games afterwards. I coaxed them into writing numbers just to experience the game. I urged them to fill in their boards more quickly so we could play. Finally, everyone had written numbers. Here’s the first game board from one of the students. 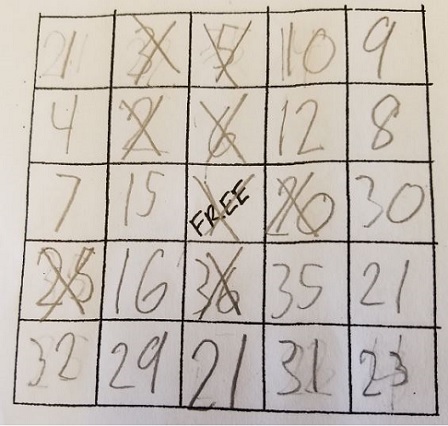 To play, I went around the room, giving a different student each turn the two dice to roll and call out the numbers. Then we said the product together. And then students looked to see if they could cross out a number on their card. The room got quiet as they examined their cards. I reminded them that they could only cross out one number for each roll. Also, I drew a tally mark next to the product on the list of numbers from 1 to 36.

The students were eager to play again. I offered some advice, “You may want to change the numbers you write on your card for the next game.” Some did 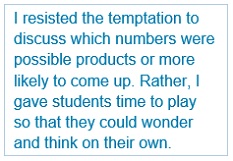 , some didn’t. I resisted the temptation to talk with the class at this point about which of the numbers between 1 and 36 were possible products . I also resisted the temptation to talk about some products being more likely than others. I’ve learned that giving students time just to play is important and valuable, and it also gives them time to begin to wonder about questions like these, and more.

We played a second game, and I marked each product that came up on the 1–36 chart using a different color marker, light blue this time. This time, it took only 5 rolls for someone to get Bingo: 3, 12, 25, 25, 30. That’s not typical in my experience. But, hey, I don’t control the rolls, which is one aspect of the game that I like.

Then, before we played again, I asked them what they had learned about numbers to write on their cards, and if they had any strategy for filling in their cards. I had them look at the data I had marked on the on the 1–36 chart, then talk in pairs, and then report their ideas. They realized that 7, 11, and 13 couldn’t come up, providing me a way for me to talk later with them about prime numbers.

There was less confusion as they prepared for the third game and some students were beginning to think more strategically. 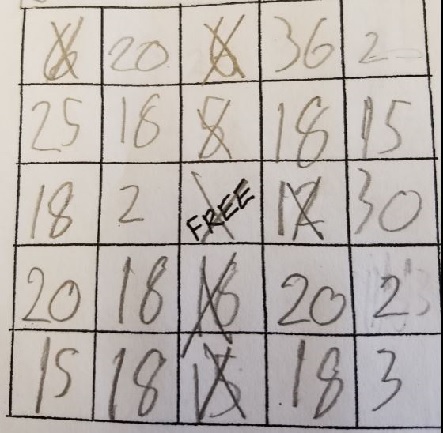 Here’s the third Multiplication Card for the student whose first card is shown above. She made more informed choices this time.

I captured the data on the chart, introducing the terminology of Frequency Distribution to describe it. 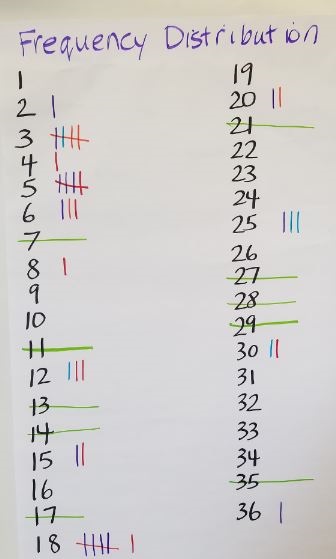 At the end of class, students wrote reflections as they do each day.

As the students played on subsequent days, their strategies improved. Also, I left the frequency distribution posted for their reference and for us to add to and discuss again.

Baby Bingo Blackout: Version 2
This version is played on a smaller grid, 3 by 3, with the goal of crossing out all nine numbers. There’s no “free” space. The first player to mark all nine products wins. 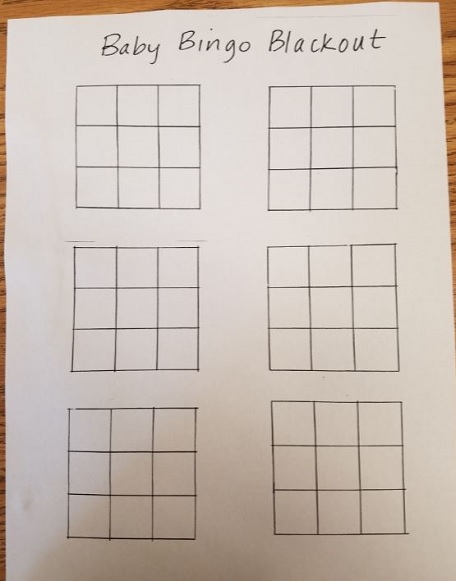 Other Versions of Multiplication Bingo
Changing the number cubes gives students new ways to experience both games. Using a 1–6 cube and a 4–9 cube changes the products that students can enter, with the range of products of 4 to 54. Using 1–10 spinners provides another variation, now with the range of products from 1 to 100. Any change in the number cubes or spinners calls for again analyzing the products that are possible, and that provides an opportunity to think more about probability.

Communicating with Families
For a writing assignment linked to the math experience, ask students to write about the game so that they can teach someone at home how to play. Several years ago I gave this assignment to a class with three prompts for what to include:

Here are samples from three students after they had learned Multiplication Bingo and Baby Bingo Blackout and played the games on and off for about two weeks. 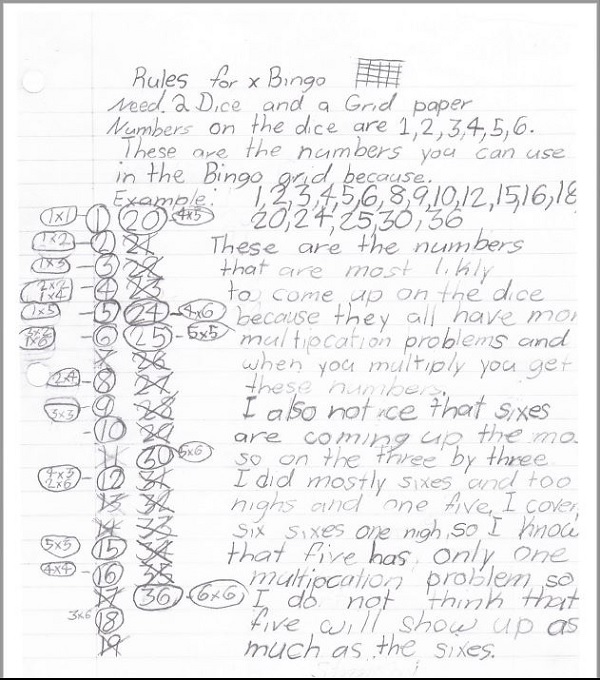 Emma explained her strategy based on products that were possible. 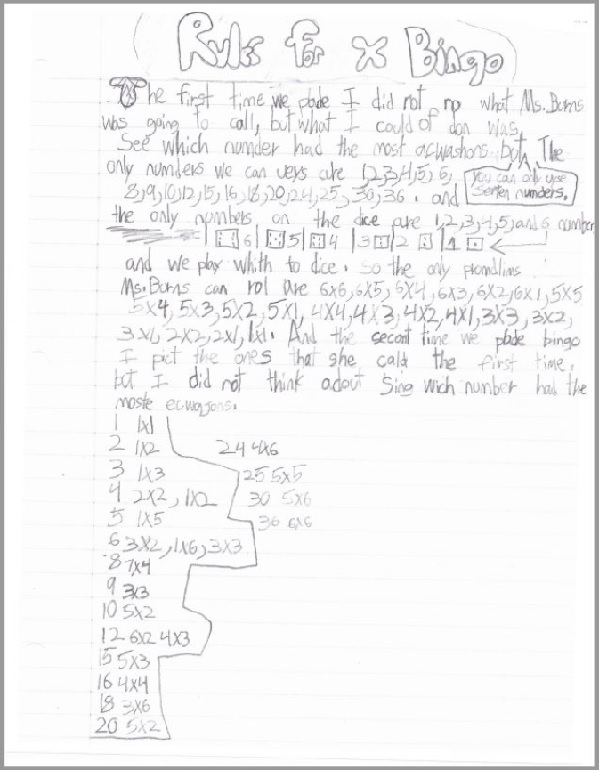 While Sam’s math thinking shows understanding, his spelling is atrocious. Out of 100 words in his paper, about 20 were misspelled. His struggle with writing didn’t interfere with his enthusiasm for the math. 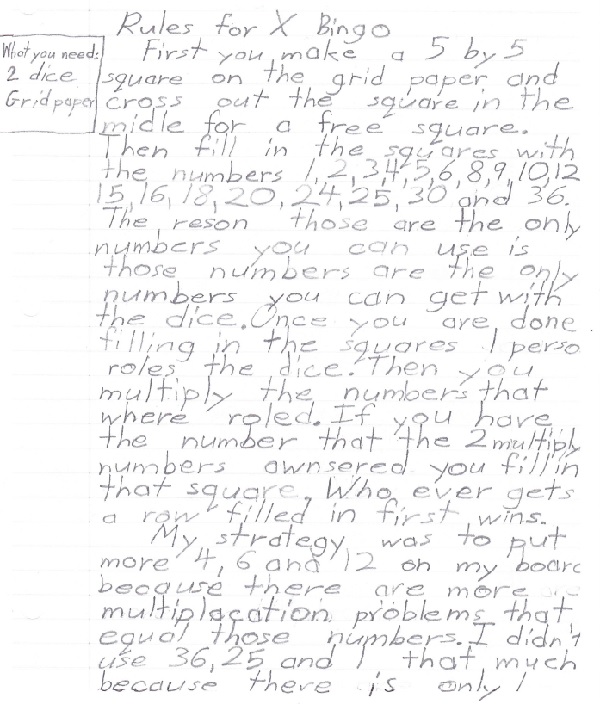 Kelly included examples of filled-in Bingo boards that she felt were successful.

About Learning the Multiplication Facts
Years ago, a boy in my class said to me at the end of the day, “I hope tomorrow that I know my times tables.” I asked him what he was planning to do that night to help him learn them. He looked at me blankly―he had no ideas for how to study.

The next day, I initiated a discussion with the class about different ways that they could learn the times tables. Students had various ideas: write them down, use flash cards, say them out loud, use a computer game. I wrote all of their ideas on the board.

Then I asked them each to choose a way that they’d like to try to learn the facts for multiplying by 4. I gave them time to choose and make whatever materials they needed, and I gave them time to try the methods they chose. I told them that when they thought they were ready, to let me know, and I’d test them. (I planned to do this by asking them three of the facts: 4 x 3, 4 x 7, 4 x 8. If they got those correct, I was satisfied.) My scheme was to give them the responsibility for learning and also the freedom to learn how. After the 4s, we repeated for the 6s, and they were free to use the same method or choose another. It worked for this class, and has been successful with others.