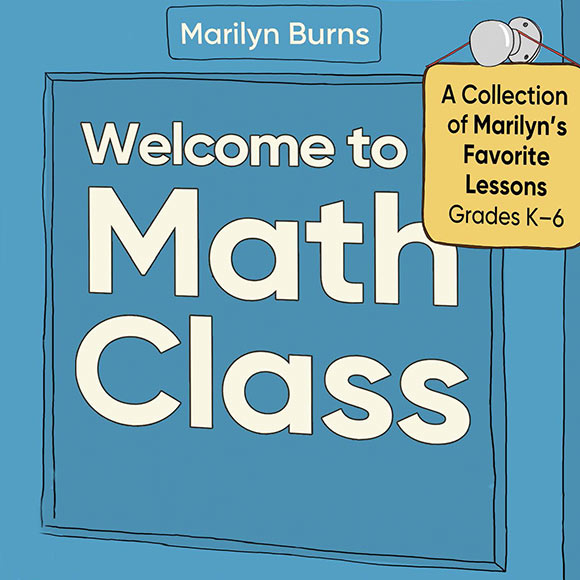 Patty: I’m Patty Clark. And this is the Welcome to Math Class podcast. I’m here with Marilyn Burns. Marilyn is a renowned mathematics educator, the founder of Math Solutions, and the author of more than two dozen books, all focused on improving math instruction in the classroom and improving the lives of students through math.

Patty: Let’s talk about games. When I was in math class as a student, Marilyn, we never played games, that was not a part of math class, but I know that you’re a huge proponent of games in the math class. Can you tell us why?

Marilyn: Common sense. I mean, as a child, I don’t know if you did, did you ever play jacks?

Marilyn: But we had ten jacks and you did twosies, and you did threesies, you did foursies, you learned just from playing the game that when you did twosies there wasn’t any extra ones, when you did threesies there’s always going to be one left over, if you did foursies . . . You just learned, from being immersed in the experience, about ten, you learned about the factors of ten when you were a kid of six years old playing jacks, trying to manipulate the ball, the jacks, and it’s not even part of the curriculum. I think most of math for me is to play with ideas, and if games can engage kids and get them playing with ideas, yes, and I think there’s a huge place for games that really are so helpful to teachers in classrooms and so engaging for kids.

There’s so many simple games, but there’s so many games that I think are valuable especially because they get kids thinking strategically and in the act of playing, your mind is free to sort of figure stuff out.

Patty: So, when I’m having students play games in my classroom, I hear you talk about them thinking strategically. What is my role as the teacher in the playing of the games?

Marilyn: Well, I think first is the choice of games. I find the games that are most successful are ones that they have to have some strategy involved, but they also can have some luck involved so that there’s a little tension in the game and they also have to give the kid where there is some math that is related to it that’s important for the kids to learn. If I have that, then I just look for it, how are the kids engaging with the math? Are they thinking strategically and getting better at playing the game? I think that’s really, really important. The luck thing is just learning how to be a nice person and play fairly and be able to lose and be able to win, how to be a loser gracefully and how to be a winner gracefully. It just does everything in the class.

Marilyn: Yes. Oh yes. Very specific about that, “Do you think this is a game of luck?” And there’s also another thing, because actually game theory in mathematics was often taught as an upper division course. There’s a whole genre of games called Nim. There’s a game I’ve always taught students, it’s called Race for 20, and we’re going to count and whoever gets the twenty first, but we’re not going to do it fast, not that kind of race, a different kind of race. Patty, when you count, you start with one, if you stop there I pick up where you left off to two, and when you count you can say one number or two numbers. Let’s play a quick game so people get an idea.

Marilyn: I’ll just remind, whoever gets to land on twenty wins. So, you said four, five. Six, seven.

Patty: You are smiling. I’m smiling as well. I’m sunk.

Marilyn: I say seventeen and Patty says she’s sunk. Why do you think you’re sunk?

Patty: Because there are three numbers left so it doesn’t matter if I take one or if I take two, you’re going to get the last one.

Marilyn: Right. I play this game with kindergarten kids, we’re just counting to twenty, and they laugh and they laugh, and “Can we play again?” I said, “You have to go play with your friends and then when you think you can beat me . . .” I will tell you that I will beat you, but you could beat me, and there’s two choices you have to make, what numbers you’re going to say and also, maybe it matters, I think, who goes first. You have to decide about that. So, there is a strategy there. There is no simpler game that I know other than this. It’s really a version of this upper division math level, sometimes toward a graduate school of game theory of Nim. The rules are easy to follow, that’s important, and there’s a math thing.

Now, for kindergarten kids that are just practicing counting to twenty, when I get to kids who are older, fourth and fifth graders, I can change it to Race for 21, I can change when instead of counting one or two numbers, you can count one, two, or three numbers, it all has to do with analyzing the multiples. You can analyze this game so that if you give me, we’re going to play race to blah blah and we’re going to count this many numbers, I can’t sit down now and figure out a winning strategy. A winning strategy is a way that I’m going to be sure that I’m going to win.

Tic-Tac-Toe, it gets boring because after a while both players are equally competent then it’s going to be a hung game every time, but I’m looking for games where once it’s over, the strategy is gone, I mean, both people have access to the strategy, then it’s no longer interesting, so I want interesting games that are new. “I got a new game,” I say to the kids, “This is a game that has luck and strategy in it and it’s for two players.” Or, “I got a new game. This game is only strategy and it’s for two, three, or four players.” There are just these genres. So, games just become part of the class.

Marilyn: There are lots and lots of games that are available. Sometimes there are classroom games you play with the whole class. Four Strikes and You’re Out. Boy that game is . . . I wrote a blog about it, and every once in a while it pops up again, and a bunch of teachers are so excited, their kids love the game. So, you can get it on my math blog, but it’s really one that reinforces computation. It’s like playing hangman in math where you have to guess the numbers, and the kids have four strikes only. Well, they always argue. Let’s play three strikes because that’s really what baseball is. You want three strikes? You’ll be sorry you didn’t take four strikes. So, they have to see if they can beat the game. Everybody loves it. So, I just want games that everybody loves—kids, teachers, me.

Patty: So, if I’m playing Four Strikes with my students, and what I’m really getting are a lot of guesses, how do I slow them down?

Another kid guesses two. I say, “Aaah.” I put the two every place it went into the problem, and no strikes. Can they fill in the gameboard before they got four strikes? And kids will keep guessing randomly in some way but there is some point when someone says, “Aha! You got this number and this number, so that number is going to have to be . . . I know you’re going to have to . . .” They start to logically reason what’s missing.

And not everybody comes in the same place, but one kid does, and I say, “Could you explain that? Can somebody else explain what Marco said in your own words? PL, Briana, you explain it. Can somebody else explain that? Would you turn and talk to your partner about why Marco’s strategy makes sense?’’ So, you use all your good classroom pedagogical skills, and you move the game back. And my advice when you’re playing Four Strikes is, write the problem down on a piece of paper that you can refer to, and then when the kids learn, let them make up a problem and do it.

You can do it for addition, subtraction, multiplication, division, problems with fractions. I don’t care what you can do. They’re just so open ended.

Patty: But it’s critical as a teacher that I am looking for those opportunities to get them to stop and reason. This isn’t just a guessing game. Let’s stop for a minute and think about what we know, and what we think our next best move would be.

Marilyn: And sometimes, I’ve actually stopped in the middle of the game and switched to a writing assignment. Right now, what number are you going to guess next, and why? So, it all becomes—everything is communicating. Everything is thinking, reasoning, and communicating.

Marilyn: Well, typically a whole-class lesson to introduce the game. Then it goes onto the menu, as independent choice for kids to play and play repeated times. Every once in a while, I stop and have a discussion about strategies or the particular mathematics in the game. And I will say one other thing about this. Whenever I introduce a new game, whenever I introduce anything new, that lesson is really messy. Kids are confused, what am I supposed to do? And I have to live through it every single time and remind myself, it’s the first time, wait till tomorrow, wait till the next day.

And then, all of a sudden it becomes part of the classroom repertoire and it’s smooth and easy. But things can be rocky at the beginning.

Patty: So, at the beginning, maybe, let’s just learn the basics of the game and not worry too much about strategy, maybe, the first time.

Patty: Once we’ve gotten the basics of the game then we’re ready to start really thinking about what our best moves are.

Marilyn: Who has a strategy, who has a plan, once I bring a game back. And then as a writing assignment, Write up the rules of the game and prepare like a Bingo game so you can go home and teach somebody in your family at home.

This episode is part of a series inspired by Marilyn’s book, Welcome to Math Class.