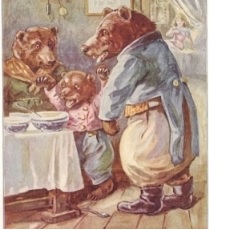 The staff knew that the back-to school session was to help them think about their priorities for teaching math. So it was understandable why they were curious about why I had asked them to write once-upon-a-time openers for Goldilocks and the Three Bears. But they were game and did the assignment.

I had them each share their opener with a partner, and then we went around the room and they read their sentences aloud. They were surprised again, this time at the range of different approaches. Some had focused on Goldilocks, some on the bears, some on both, some on the setting, one on the break-and-entry aspect of the story.

“What do you think is the real opener for the story?” I asked them.

The discussion was lively. Some felt sure they had the “right” sentence and defended their choices. Others acknowledged that different sentences made sense, depending on their perspectives about the story. They all agreed that even those with the same perspective could have worded their openers differently.

I shared opening sentences from an internet search for published versions of the story:
• Once upon a time, there was a little girl named Goldilocks.

• Once upon a time there were three bears who lived together in a house of their own in a wood.

• Once upon a time, Goldilocks was playing in the woods near her home.

• Once upon a time, there was a little girl named Goldilocks, who was very, very good, except that sometimes she forgot to do things that her mother told her to do.

“What would you expect if you gave your students this same assignment?” I asked. They agreed that they’d most likely get a range of responses.

Next I wrote 15 x 12 on the board and asked the teachers to figure out the answers in their heads. After they had a few minutes to do this, as I had done with their opening sentences for Goldilocks and the Three Bears, I had them talk with a partner about how they solved the problem. Then we went around the room so they could share their methods. As they explained, I recorded their thinking on the board. Again, there was a range of different approaches.

I showed them video clips of three fifth graders solving the same problem.

Then we talked about how the experience of writing openers for Goldilocks and the Three Bears and the experience figuring out the answer to 15 x 12 were the same and different. For both experiences, they had to solve a problem—writing an opening sentence or solving a math problem. The conclusion: There’s more than one way to solve most problems, even when the problem has one right answer. A teaching priority: Find ways in math class to engage students with problems that have different strategies for solving, and promote and honor students’ different ways of thinking.

Note: For a classroom lesson that engages students in thinking about different ways to solve a problem, see my previous blog post: A Mental Math Lesson.

Thanks to Susan Ohanian for introducing me to the Goldilocks and the Three Bears activity.