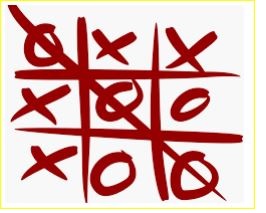 I can’t remember how old I was when playing Tic-Tac-Toe became too predictable to be interesting. But I’ve now learned versions that add new twists to the game. Here are five suggestions for reviving the game of Tic-Tac-Toe and engaging kids in thinking about new twists and new strategies. Check the end of the post for ideas about introducing these games to kids and some additional information.

Twist #1: Your Choice Tic-Tac-Toe
What’s the same as playing the regular game is that you take turns as you usually do. What’s different is that you don’t start by deciding who is X and who is O. Instead, on your turn, you may write either an X or an O in any empty square, and you can change your mind from turn to turn. So can your opponent. The winner is the same as in the regular game―whoever completes a row with three Xs or three Os wins―whether or not that player actually wrote them all. 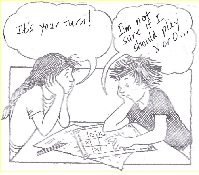 Twist #2: Number Tic-Tac-Toe
You don’t use Xs or Os for this version. Instead you use the numbers from 1 to 9, and each of these numbers can be played only once in a game. You take turns as usual. On your turn, write a number (that hasn’t yet been used) in an empty square. The winner is the player who gets the numbers in any row, column, or diagonal to add up to 15. 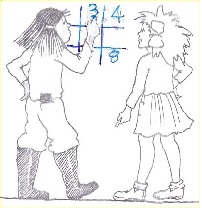 Twist #3: Last One Wins Tic-Tac-Toe
You’re back to Xs and Os for this game, but in a different way. Here’s how to play: Suppose you’re playing X. On your turn, you can mark Xs in as many squares as you’d like, as long as the squares you mark are all in the same row or column. (You can’t play on a diagonal for this game.) Whoever fills in the last space is the winner.

Twist #4: Tic-Tac-Toe for a Crowd
This game works for three to six people. When you draw a tic-tac-toe board for a standard game, you draw two lines vertically and two lines horizontally to create a board with nine squares. For this game, you need a giant tic-tac-toe board that you draw with 10 or so lines both vertically and horizontally. The exact number of lines you draw isn’t important, just so the game board is BIG. Then each player chooses a different letter or symbol. The idea is the same as tic-tac-toe, except that instead of winning with three in a row, the winner has to get four in a row, horizontally, vertically, or on a diagonal. 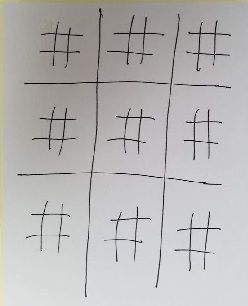 The first player plays an X in any of the 81 small squares on the board. 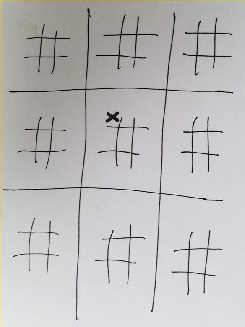 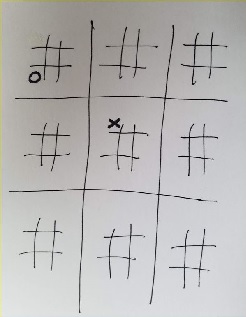 And this is how play continues. If you’re confused, this might be a good time to watch the YouTube video. 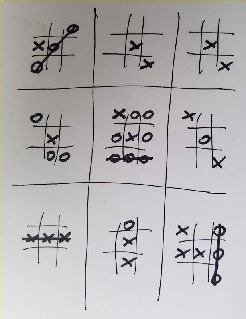 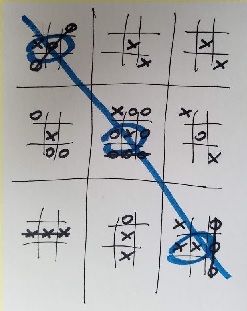 Confused? I was, until I tried the game. Once I got the hang of moves, the game became interesting, Really, really interesting. And, for a while, addictive.

Ideas for Using the Games with Kids
1. Number 1 Rule: Encourage playing the games, but don’t force it!

3. Encourage kids to think about strategies. Maybe ask them to describe their strategies in writing.

4. Ask kids to invent their own twists on Tic-Tac-Toe.

5. Suggest to kids that they research information about the game of Tic-Tac-Toe. (Below is some of what I learned from rummaging online.)

Tic-Tac-Toe Info
Here’s some of what I learned from my online search:

These games are all from Math for Smarty Pants, a book I wrote a while ago. If you’re interested in the year I wrote it, which was the year before it was first published, just add the numbers in any row, column, or diagonal in the square below. Or, if you prefer, add the numbers in the four corners plus the middle number.  Or just look on the copyright page. 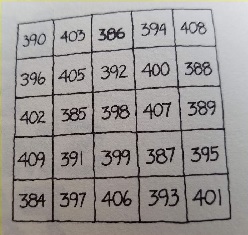 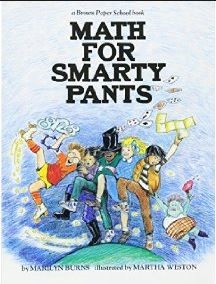 Have fun! And please post any versions you’ve invented or learned about.