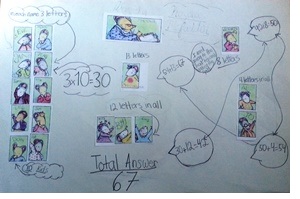 My colleague Lynne Zolli and I are working with a class in San Francisco. A few weeks ago I read aloud Kevin Henkes’ children’s book Chrysanthemum (Greenwillow Books, 1991) and then Lynne used the book as a springboard for math explorations. 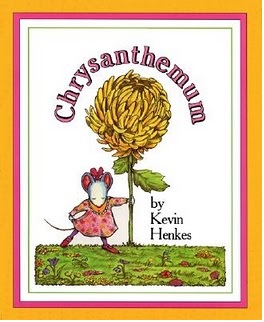 About the Book
Chrysanthemum was a perfect baby, and her parents chose what they thought was a perfect name for her. But when Chrysanthemum begins school, she finds that most other students have really short names. Even worse, some of the girls in her class tease and torment her about her name. The story has a fortunate end when the children learn that the popular music teacher’s first name is Delphinium, also long and also the name of a flower.

The students were familiar with the story but enjoyed hearing it again. They remembered that Chrysanthemum is spelled with 13 letters, and I reminded them that Victoria, one of Chrysanthemum’s classmates, explained that Chrysanthemum has “exactly half as many letters as there are in the entire alphabet.” We discussed why Victoria was correct.

The Lesson
Then Lynne presented the activity. She made a train of five interlocking cubes and explained, “This represents my name because Lynne has five letters.”

She asked the students, their teacher Sara, me, and the other two adults in the room, to make trains of interlocking cubes as long as letters in our first names. Some of the students had questions: “My real name or my nickname?” “I’m really called by my middle name so which name should I use?” Lynne had them decide for themselves.

After each student had made a train, Lynne collected the remaining cubes. Then she posed an estimation question, “How many letters do you think are in our first names altogether, including my name and the names of the other four adults in the room?” Some students guessed, others tried to figure.

“Let’s use the cubes to find out,” Lynne said. She held up her train of five cubes and asked, “How many more cubes do I need to add on to my train to make a train that has ten cubes?” “Five,” the students answered in unison. No one in the class had a name with five letters, but Mikala offered five of her six cubes. Lynne took them, added them to her train, and placed the train of 10 on the chalkboard tray.

Lynne held up Mikala’s last cube and asked, “How many more cubes do I need to add on to make a train with ten cubes?” “Nine,” thet students answered. No one had a train with nine cubes, but Carolina offered her train of eight cubes and Samari offered one of her cubes. Lynne placed this train of 10 next to the other.

Next Lynne took Samari’s remaining five cubes and asked, “How many more cubes do I need to add on to make a train with ten cubes?” “Five,” the students answered. Lynne took John’s train, added it to Samari’s train, and also used one cube from Hector’s train. She placed the train of 10 on the chalkboard tray. 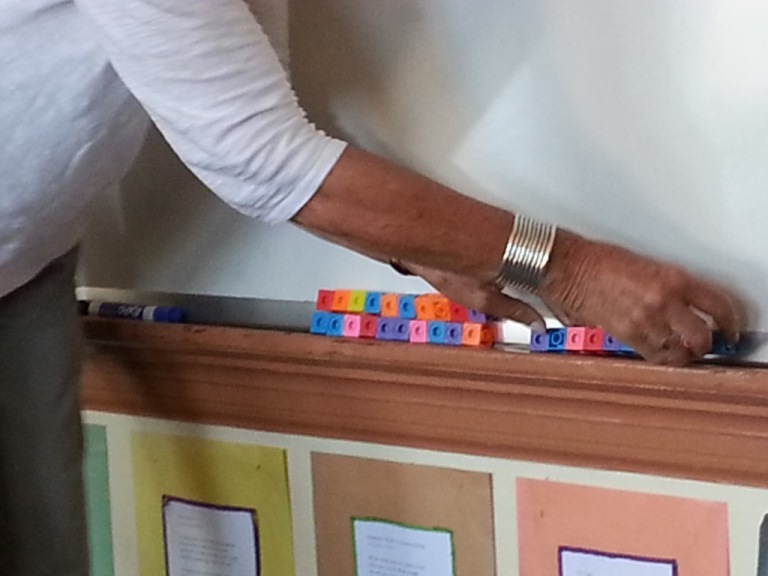 Lynne continued making trains of 10. When all of the cubes were used, the students counted by 10s and added on the extras to find the total.

Figuring the Total in Another Way
Lynne next gave each student a 3-by-3-inch sticky note and asked them to write their first name and the number of letters in it, and then to put their note on the chalkboard. 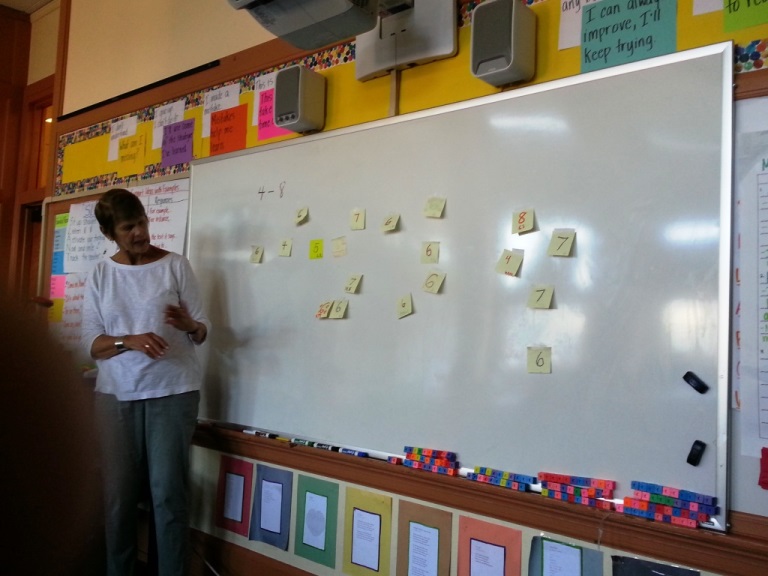 “Lots have six letters,” Jaleya noticed. “Put all of them together.”

“Put the sevens together, too,” Jonatan said.

After the sticky notes were rearranged, Lynne had the students first figure out how many letters were in the eleven names with six letters each. Then they added on the letters in the other names. Lynne recorded equations as they gave their suggestions. 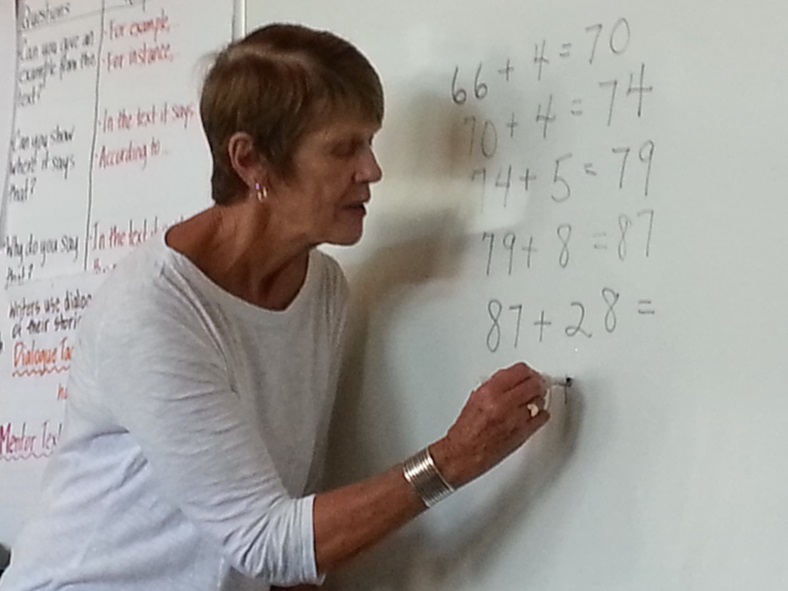 Watch Out for Floating Sticky Notes
A moment after Lynne had the students post their sticky notes, two of them came loose and floated to the floor. As soon as Lynne retrieved them, a few others came loose. The students found it funny.  A tip: Have tape available.

A Follow-up Activity
It’s valuable to follow up a class activity with independent work. We prepared a sheet that had individual photos of all of the students in the class, and duplicated a copy for each student. The next day, we gave each of the students a sheet of their individual photos. The instructions were for them to cut out the photos, arrange them on a sheet of paper (we gave them 12-by-18-inch drawing paper), and figure out how many letters in all. We didn’t include the four adults who were in class the day before, but the photos included Alisha, who had been absent. Also, we didn’t give them instructions about how to arrange the cut-out photos, but instead told them to organize them in a way that made sense to them for figuring out the total.

After the students finished their work, Sara had them do a classroom walk to look at each other’s papers. They noticed that students had arranged the photos in different ways. This was OK. Also, some had arrived at different totals for the number of letters. This was not OK, and students helped each other find and correct errors. 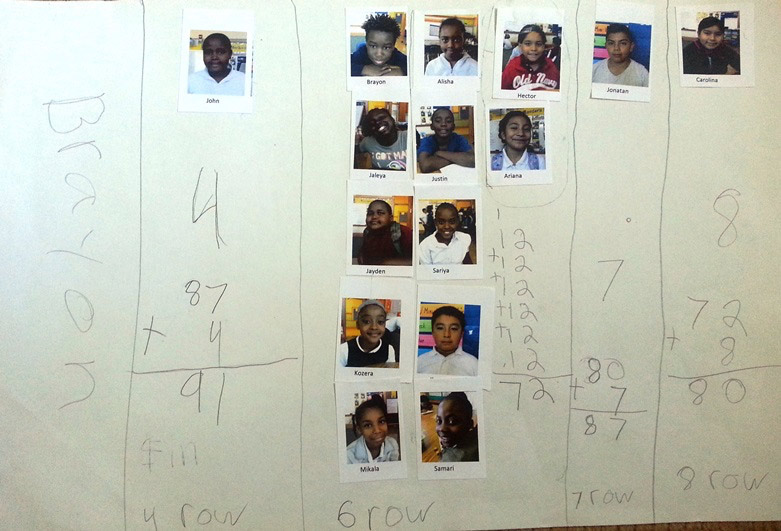 Brayon organized the photos groups according to the lengths of the letters and labeled them 4 row, 6 row, 7 row, and 8 row. 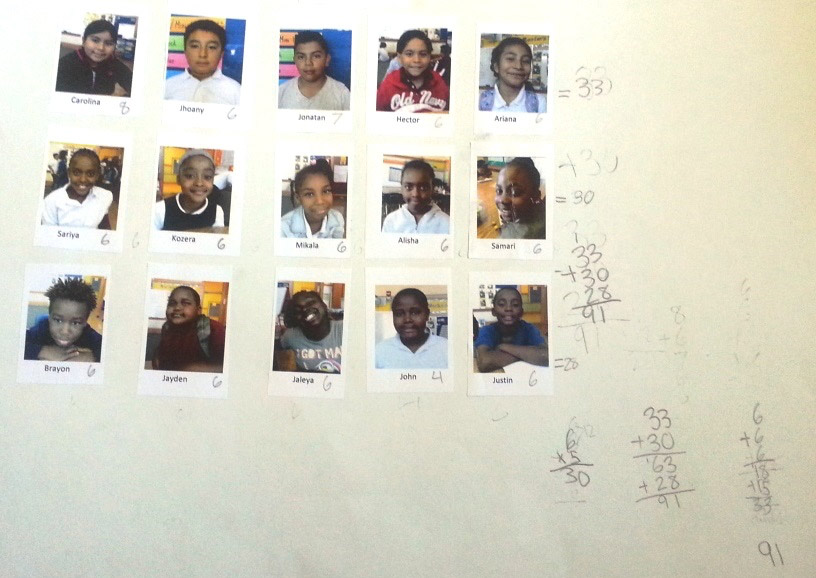 In the top row, Carolina put the photos of the five students in the class who spoke Spanish in one group, and she arranged the rest of the students’ photos in the next two rows.

A Second Follow-up Activity
The following day, Sara gave each student a copy of the page in the book that shows pictures of the students in Chysanthemum’s class and her teacher, Mrs. Chud. 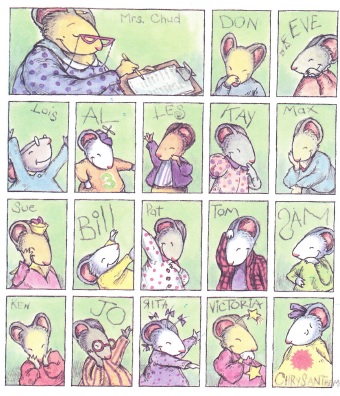 Sara gave directions, “Cut out these photos and arrange them in a way that’s helpful for adding the number of letters in the names efficiently.” She told them they could use ideas for arranging the photos that they had seen on others’ posters. Also, this time they were to write about how they figured out the total.

It was interesting to see how some students changed their systems. For example, with the first assignment, Jhoany pasted the photos in a row and added up; for the second assignment, he grouped the names to make 10s. 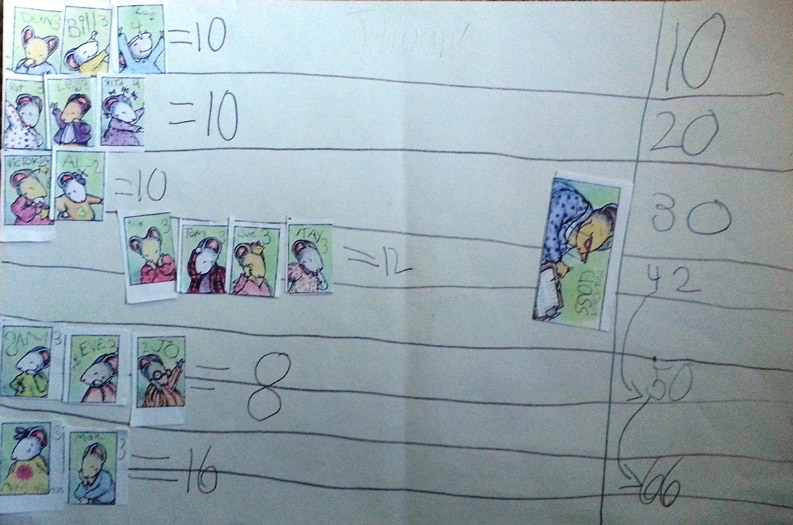 Jhoany’s answer was off by 1 because of an error—his first group included Don, Bill & Lois, and those letters add to 11, not 10. Ah, another reminder that incorrect answers can mask good ideas.

Results from Another Class
I taught the same lesson the next week in another class. Since Lynne had led the activity, I wanted to have the firsthand experience of teaching the lesson myself. Their teacher, Katherine Marcus, had already read the book to the class before I arrived. The book is a favorite of hers, but she had never used it for a math lesson.

I did a quick review of the story and then began the math activity. We figured the total with cubes first, and then I had the children post their sticky notes. 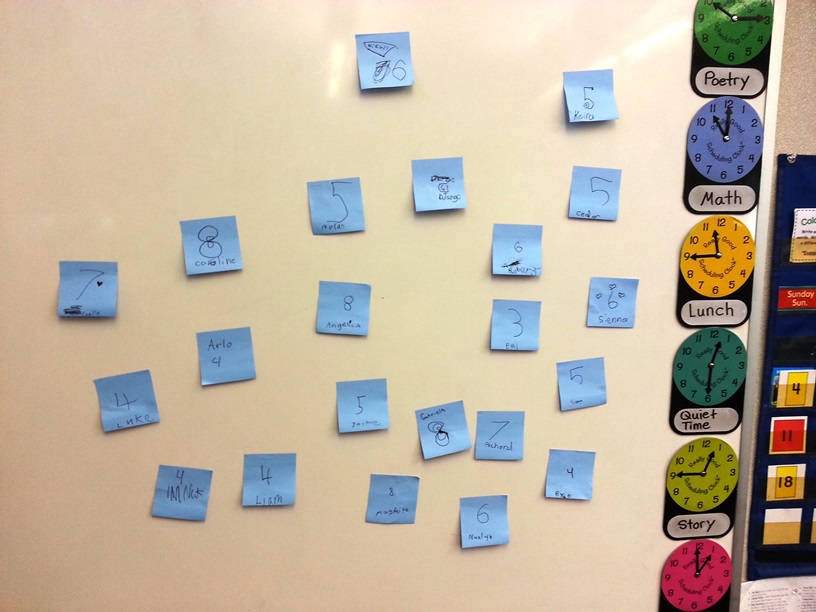 When I asked the students how to rearrange their sticky notes (which, thankfully, stuck well to the chalkboard), they didn’t suggest grouping them by the number of letters in their names. Instead, Luke said, “Let’s make tens.” I followed his suggestion. But our numerical figuring produced a total that was different from the total we figured using cubes. Then John and Willy found their sticky notes, realizing that they never posted them. 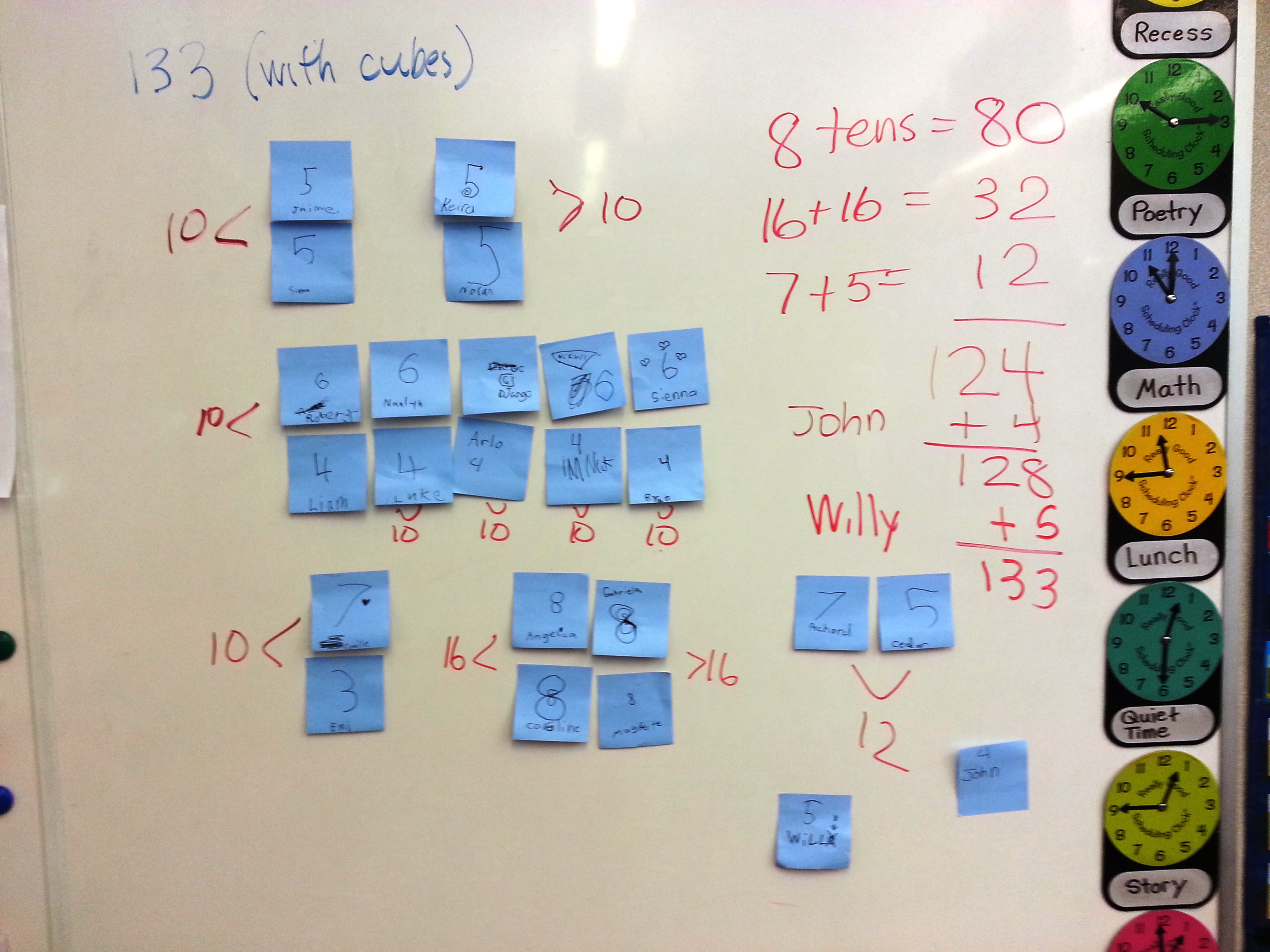 As a follow-up, the students figured out the total in Chrysanthemum’s class from the book, as the students did above in their second follow-up activity. Again, the students cut out the photos and arranged them in any way they wanted. Their teacher, Katherine Marcus, commented that she thought the activity was especially good for giving the children experience organizing their work for themselves.