An Important Teacher Decision: When and When Not to Give the Answer?

The fourth graders I’ve been working with this year have recently been learning about fractions. Last week I began a lesson by drawing two representations on the board (as shown above) and writing a question.

I gave the students about five minutes to do a “quick write” to answer the question and explain their thinking. I collected their papers without commenting on them, and then I began the discussion.

The conversation lasted for about 45 minutes, and a variety of arguments emerged. It was obvious to some students that the blue representation was 5/4, but others weren’t sure about that.

It was fascinating. I’m not sure the photo below showing the board work is useful, but students came up and gave different ways to explain their thinking and to convince those who disagreed with their position. 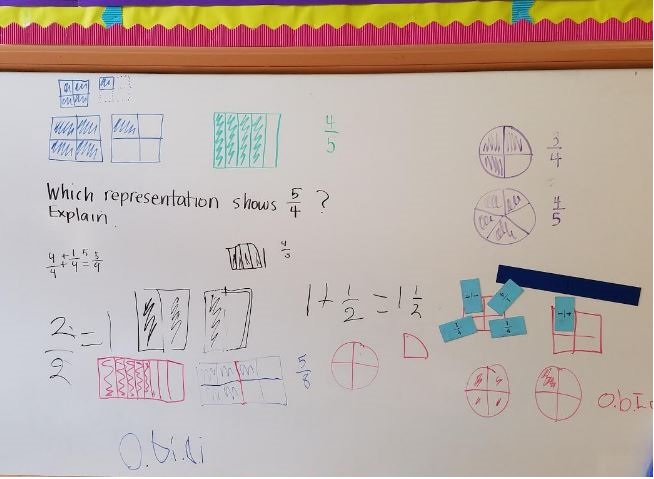 Some students changed their thinking during the discussion, a few more than one time. It was an amazing discussion because everyone was involved in asking questions and making comments. The students listened respectfully to one another. The conversation was testimony to the work that their regular teacher, Sara, has done to build a classroom climate that supports this sort of discourse.

Ending the Discussion
Math class is the hour before lunch, and after the conversation had gone on for almost 45 minutes, one boy announced, “I’m tired and I’m hungry.” I could see his point and said that it was a good time to stop.

My Teaching Dilemma
The students wanted to know what the “real” answer was. And there I was facing one of those teaching decisions for which I’m not sure there’s a right answer. Should I tell the correct answer?  Would that nurture or shut down thinking?  How do I honor the students’ efforts to make sense and communicate, while also being true to the mathematics?

I didn’t want to foster misconceptions. I saw the need to emphasize the importance of identifying what is the whole. The girl arguing for 5/8 considered the two squares as one whole, as if it were a chocolate bar scored into eight pieces, each 1/8. Others thought (as I did) that each of the two squares was a whole divided into four pieces, each 1/4. Defining the whole and keeping your sight on it is extremely important.

But I made the decision, with Sara’s agreement, not to resolve the issue. I told the students that I’d give them more time to think about the problem and that we’d come back to it.

Revisiting the Lesson
The lesson was on Thursday. On Monday, Sara asked them to revisit the problem. First they revisited the board work, which she had saved. Then Sara asked them to draw their own representations for 5/4, encouraging them to show multiple representations. She organized a silent ten-minute gallery walk for students to look at each other’s work. Before they began to look at the papers, she directed them to think about what they learned, were unsure about, or were wondering. She distributed post-it notes so that students could leave their comments as they read what each other had written. 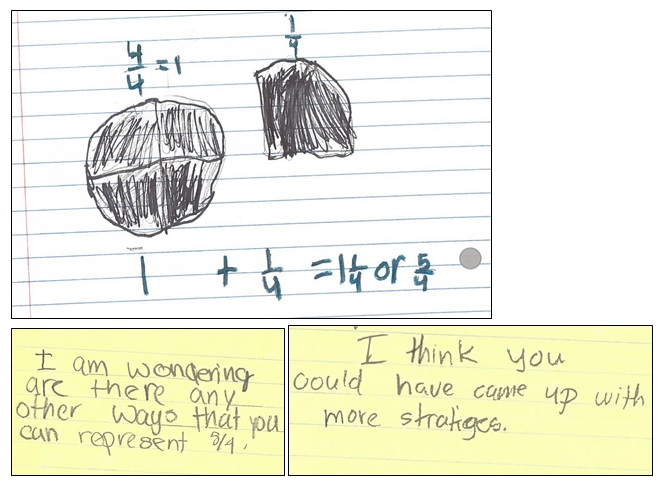 This representation shows the student’s comfort with using a mixed number for 5/4. 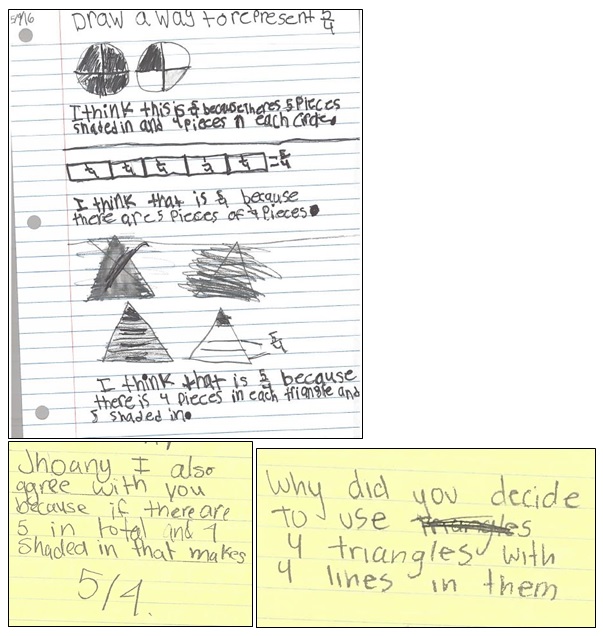 This student struggled with showing 5/4 with triangles. The class would benefit from exploring dividing a triangle into equal parts. 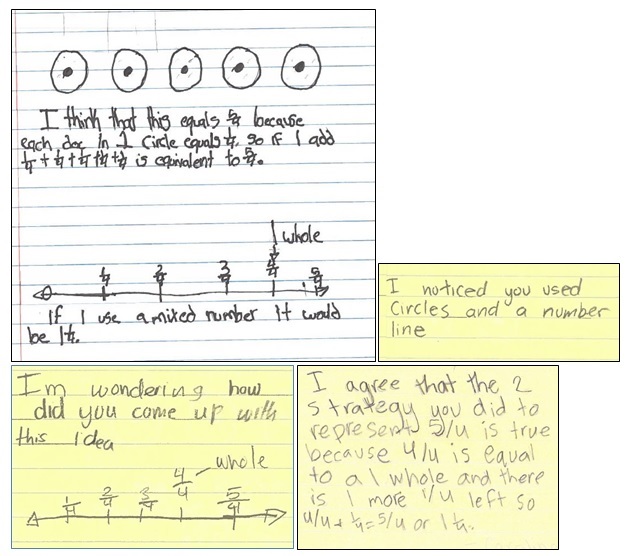 This student shows comfort with using the representation of a number line and with mixed numbers. But I’m not sure why he thinks the dots in the circles show fourths.

P.S. Before teaching the class, I wanted to be prepared in case the question didn’t spark any controversy. My backup was to ask them a question I was introduced to by Phil Daro: Which of the two fractions—5/4 or 4/5—is closer to 1? I’ll save that for another lesson.

P.P.S. Students write reflections at the end of each math class. One boy, who is prone to confrontations with students during recess, made my heart sing by writing the following:

P.P.P.S. I got the idea for this lesson at the NCSM 2016 meeting this April when I attended Susan Jo Russell’s session titled Productive Lingering: Elementary Students Learn About Structure of the Operations Through Representation-Based Argument. The description read: “Too often representations are passed over quickly, as if what they illustrate is obvious. What does it look like when grades 2–5 students spend focused time creating, comparing, and analyzing representations in order to understand the structure and behavior of the operations? Video examples from our research will be used to examine these questions.” I’m pleased that I attended Susan Jo’s session (as I always am after hearing her speak).