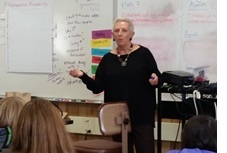 I spent a week teaching a mini-unit on Statistics & Probability in my grandson Charlie’s 7th grade class. Here I describe Alphabetical Probability, one of the eight menu investigations from the mini-unit I presented that week. This investigation connects statistics and probability to the English language.  Students collect and organize data about the frequency of letters in a sentence from a book, post their data on a class chart, and then compare their data to the actual frequency of letters.

Setting the Stage for the Investigation
I began the lesson by asking students to think about which five letters of the alphabet are most commonly used in the English language. After they talked in their groups, I had them report their ideas and explain their reasons. Carolina said, “The vowels are probably most common because all words have them.” James thought, “I think the letter ‘s’ has to be one because we have so many plurals.” Andrew said, “Maybe ‘e’ and ‘d’ because we use them a lot with past tenses.” It was a lively conversation.

Giving Directions
I then posted these directions and gave time for the students to read them. I also posted a class chart that listed the letters from a to z.

I reviewed the directions with the class, telling them, “Each of your sentences will be a small sample of how often letters are used. But when we collect the data from all thirty students on the class chart, we’ll have a much larger sample of the frequency of letters.” I intentionally used the language of “sample,” “data,” and “frequency,” not defining these terms but embedding them in the context of the investigation. I used the mathematical terminology as often as possible.

Collecting Data
The room got noisy for a few moments, then quieted down as students began to collect their data. 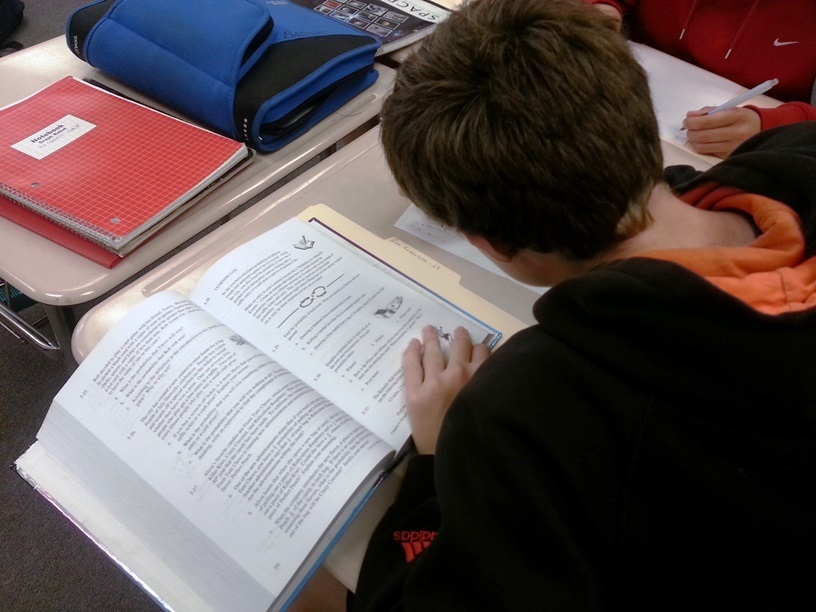 I hadn’t given students directions about how to organize their work. I purposely didn’t prescribe a method, instead giving them the opportunity to decide for themselves. I think it’s valuable for students to have experiences organizing their work in ways that make sense to them, instead of giving them prepared worksheets to complete. Students recorded in different ways, and later I had them share their papers so that they could see other options. 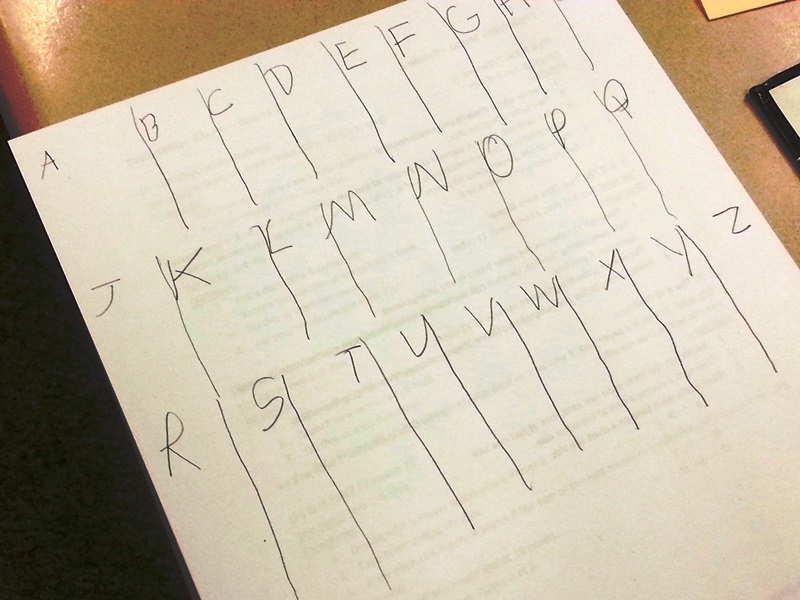 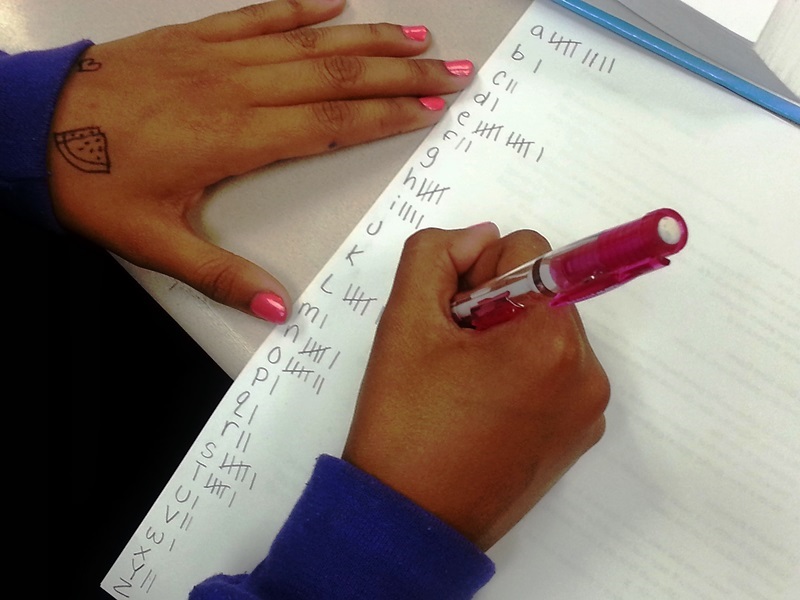 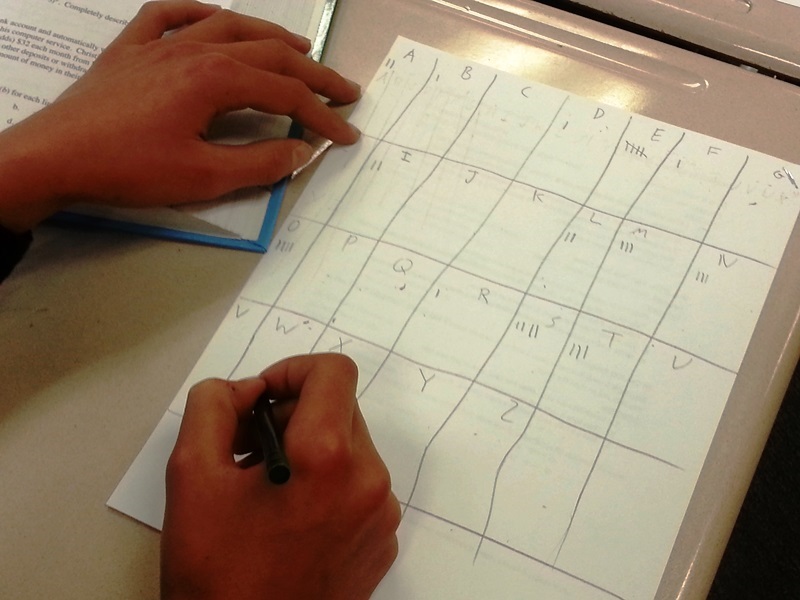 As I wrote above, this was part of a larger menu that included other investigations and class charts for recording. Two days later I focused their attention on the Alphabetical Probability class chart.

In the meantime, I prepared a strip of adding machine tape with the letters of the alphabet written on it in their actual order of usage according to our English Letter Frequency. (This was based on a sample of 40,000 words.) I rolled up the strip and secured it with a paper clip.

Analyzing the Class Data
When the class looked at the data everyone had recorded on the class chart, I asked which letter occurred most frequently. It was obvious that it was e. (Jake counted and e had occurred 179 times.) It was also obvious that z occurred least often. (It occurred once.) I asked them to work in pairs and list the letters in order from e, which was used most, to z, which was used least. I showed them how to put brackets around letters that were used the same number of times. There was a little confusion about some tallies that hadn’t been made correctly or clearly, but I told them to do their best. 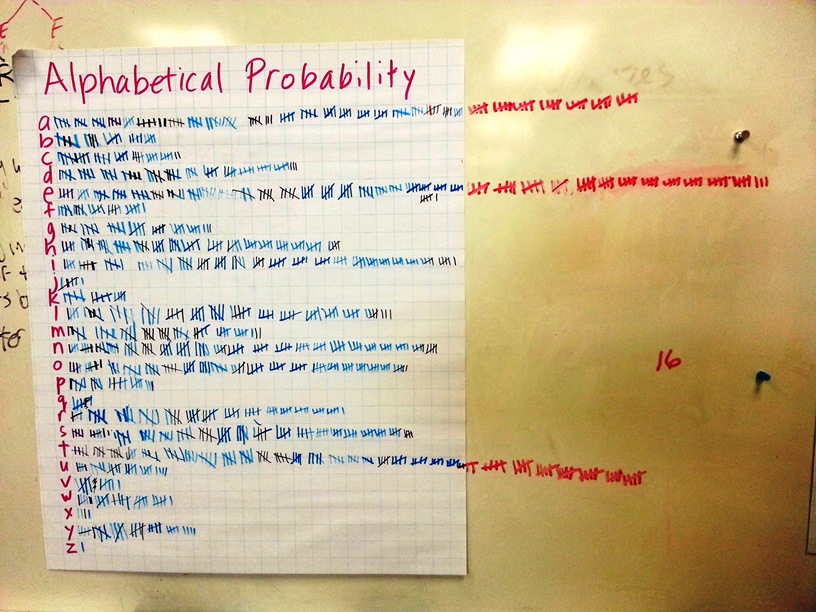 After everyone had listed the letters in the order of their frequency from e to z, I asked Julia to read the list she and Cora had prepared. On the board, I wrote the letters as they read them, spacing them to match as closely as possible to how I had written the letters on the adding machine tape.

Then, under our class list, I taped the list I had prepared, still rolled up. I told them, “This is the actual order of the usage of letters based on a sample of 40,000 words. Our class data represents between 300 and 600 words. Watch as I unroll the list and we’ll see how the data from our class sample compares to the actual frequency of letters.” The students were curious as I unrolled the tape, eager to compare it to what their data had produced. While the letters weren’t exactly in the same order, the similarities were impressive when I grouped them as shown below. The students were pleased.

Summarizing and Extending
Alphabetical Probability addresses grade 6 and 7 Statistics and Probability content standards. The investigation engages students with several important mathematical ideas: summarizing and describing distributions, using random sampling to draw inferences, and comparing inferences. I used the content standards as my guide for discussing how we can gain information about the usage of letters by examining a sample and about the benefits of larger samples.

I also related the activity to other contexts. We talked about games where this information is useful, such as Scrabble and Boggle. Also, I gave them a language challenge of choosing one of the six most common letters and writing three sentences without using the letter they chose. (I gave them an example of three sentences without the letter e: This is odd. Do you know why? Try and find out.)

A Final Note
The investigation is also appropriate

*** Thanks to Annie Adams and her class of 30 seventh graders at Henry Hall Middle School in Larkspur, California.