In A Mental Math Lesson, I explained how I recorded the students’ different strategies for adding 99 + 17. Also, I showed them videos of other students solving the same problem and had them compare each of the strategies on the video clips to theirs.

What I didn’t include in that blog post was how I next talked with the students about the Mathematical Practice Standard: Construct viable arguments and critique the reasoning of others.

When I taught the lesson, after we had discussed the videos of other students, I wrote the mathematical practice on the board: Construct viable arguments and critique the reasoning of others.

I told the students that this is one of the eight important mathematical practices for all students in Kindergarten through grade 12. I said, “This is what you were doing today when you explained how you figured out the answer to 99 + 17 and then when you compared your strategies to other students’ ideas.”

I asked them to think by themselves about what “construct viable arguments and critique the reasoning of others” meant and then talk with a partner. Next we had a class discussion about what they thought and what questions they had. Most students weren’t familiar with what “viable” meant. Most were confused by the word “argument” because they didn’t think we were arguing about anything. And some weren’t sure about the meaning of “critique.” The need to make sense and communicate emerged as important ideas.

After students had a chance to share their thinking, I connected the two parts of the mathematical practice to our lesson. I said, “After you figured out the answer to 99 + 17, you explained how you reasoned, and that’s an example of constructing viable arguments. Then we watched how other students reasoned, and you analyzed them by comparing them to your strategies, which is one way to critique the reasoning of others.”

I told them I was interested in how they might restate the mathematical practice so that it would be clearer to other fourth graders. I wrote two sentence frames on the board as suggestions:

I circulated as the students worked, reading what they had written, encouraging some to write more. 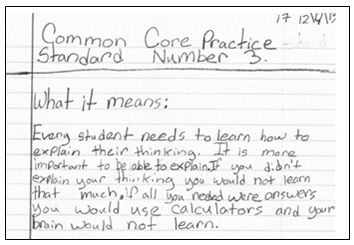 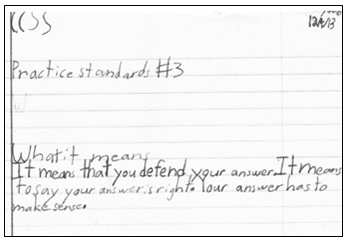 Cassandra used what she was learning about multiplication to illustrate her idea. The multiplication example shows her incomplete understanding of partial products. 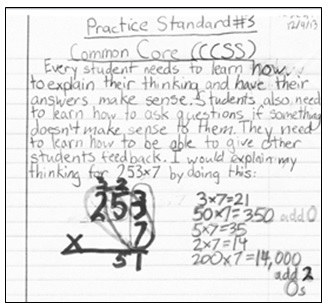 Jeremy copied what I had written on the board. I asked him to add a sentence that described what he thought in his own words. He added: Show your thinking. 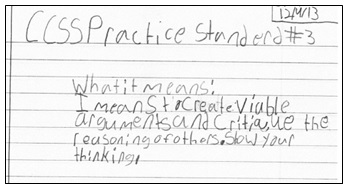 I think this lesson would be useful at the beginning of the year, both as a way to engage students in reasoning mentally, and also to establish and emphasize one of the mathematical practices.