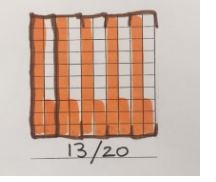 [An aside: Phil Daro and I have been thinking recently with Lucy Calkins and her reading/writing team about crosswalks between ELA and math instruction. One obvious crosswalk to investigate is the role of writing in both areas. For this lesson, I planned to have students write what might be similar to a persuasive essay that would support their thinking about fractions and decimals in the context of this image. However, I wasn’t aiming for students to prepare essays for publication, as they do in writing workshops, but rather giving them an experience to focus on what William Zinnser wrote in Writing to Learn: “Writing is a way to work yourself into a subject and make it your own.” I was more interested in their writing giving me insights to their understanding. As students wrote, I would encourage them to revise, clarify, rethink, and so on, many of the same ways I might intervene with students engaged in a writing workshop.]

Before I presented the writing assignment, I planned to lead a number talk. This would help me set up the problem, and would also give me the opportunity to assess whether the assignment was appropriate for the class. After an introductory number talk, I’d decide if the assignment could help to develop, cement, or extend students’ learning. My questions:

[A second aside: I’ve thought often about what the difference is between a number talk and a lesson. Typically, number talks are shorter, and I planned for this introduction to take about 15 minutes. So I guess it fits into the category of “number talk” from that perspective. But it wasn’t a stand-alone experience, but rather would serve as the introduction to a longer lesson that would include the writing assignment and a discussion after that. I’m honestly struggling with what differences there are between number talks and lessons beside the time constraint. But I’m happy to call it whatever.]

My Lesson Plan
The teaching plan I came up with was to show the students five images, one by one, and discuss each.
Image#1 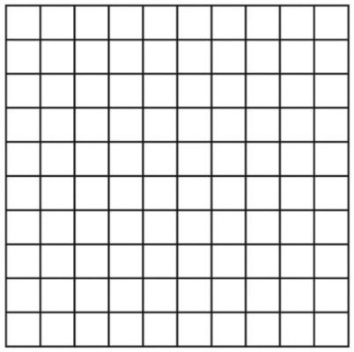 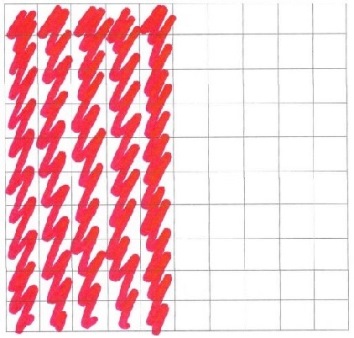 For this image, I planned to ask, “What number could I write to describe how much of the grid is shaded?” I would use students’ responses to test my assumption that they were familiar with the idea of one-half and would see that I had shaded in one-half of the grid. I was curious about their comfort with different numbers being possible; e.g., 1/2, 50/100, .5, and so on. I planned to ask the same question for this image. 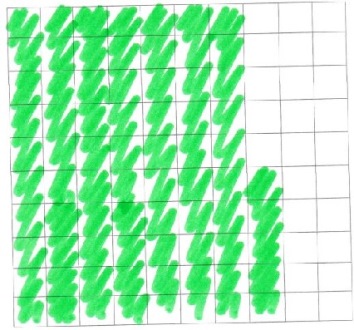 And, again, I’d ask, “What number could I write to describe how much of the grid is shaded?” 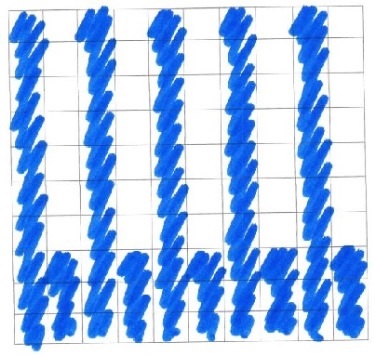 And, finally, I would ask the question for this image.

That would be the end of the “number talk” part of the lesson. Then I’d show the class to the image I saw on Twitter, with 13/20 written below the grid, and present the writing assignment I described above.

Results from the First Class
Using a document camera, I projected the images on the white board, one by one. For each, I asked students to turn and talk to a neighbor before I called on students to report to the class. Discussions for all of the images were lively. When students suggested numbers, I wrote them on the board and asked the students to explain their suggestion.

When I posted Image #4 with 75 of the 100 squares shaded, students suggested two numbers that I hadn’t anticipated: 7.5/100 and 75/102. For 7.5/100, the student explained, “There are seven and a half columns of the ten columns shaded.” For 75/102, the student explained it was the same as 75/100, but he gave an alternative, using an exponent, to represent 100. Another student suggested 3/4 as a fraction equivalent to 75/100, but wasn’t sure how to explain why. I told the class that thinking about money and quarters helped me connect 75/100 and three fourths or three quarters, that I could see three chunks of 25 each in the shaded part (I marked the image as shown below), and three 25s is 75, and 75 cents is equal to 3/4 of a dollar, which is 100 cents. I’m not sure the way I drew on the image was useful for all of the students. 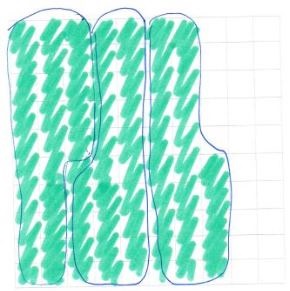 I moved on and showed Image #5: 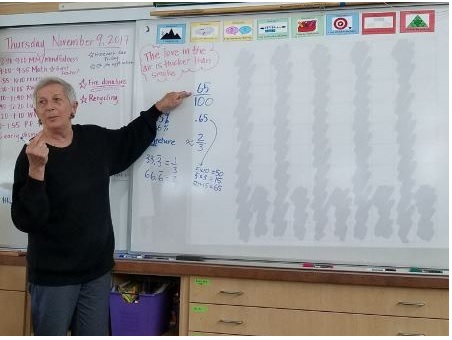 For this image, most students counted the number of squares shaded and suggested representing the shaded area as 65/100 and .65. One boy thought that it was about 2/3. That resulted in a discussion about decimal equivalents of 1/3 and 2/3, and also gave me the opportunity to introduce the symbol of two wavy lines instead of the two straight lines as in the equal sign to indicate that 65/100 was “about” equal to 2/3.

During the class discussion, I heard a variety of ideas from some but not all students in the class. This is typical, I’ve found. That’s why I think it’s important to ask students to produce individual work that can help me learn what individuals think and understand. 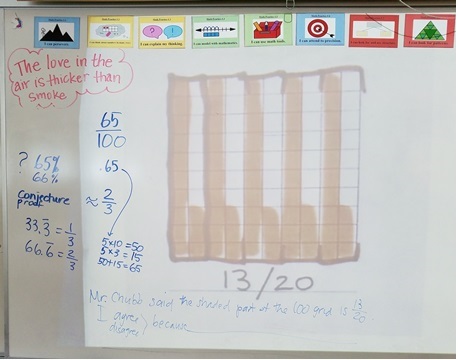 The students began writing. As they thought and wrote, I circulated and talked with students individually, prompting some to clarify an idea, answering questions for others, asking others to tell me about what they were thinking and then encouraging them to get their ideas on paper. In this class, 15 agreed with Mr. Chubb, 5 disagreed, and 3 disagreed initially but then changed their minds.

Rethinking before Teaching the Second Class
Before teaching the lesson again, I exchanged a few emails with the second class’s teacher. I sent him what I had written about my experience with the first class so that he had a sense of what I was planning to do. He was currently working on decimals with his class but hadn’t yet focused on fractions. He wrote: Keep in mind that I have not started any sort of fraction and equivalent fraction work with the class yet. Many of the kids will remember their work from 4th grade but there will be some who are very confused by the idea that 65/100 can be seen as 13/20. Will be interesting to see how they work through it.

After thinking about his message, and before teaching the lesson, I prepared two additional images. 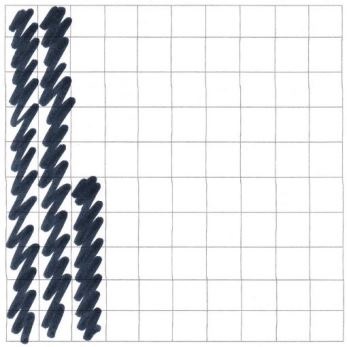 [A third aside: I think that helping students use benchmark numbers to reason numerically is important. We typically think of 10 and multiples of 10 as being especially useful for reasoning with whole numbers, and I agree. I also think that 25 and multiples of 25 are useful, numbers that our money system helps make accessible to students. I look for opportunities to engage students in using 25 as a benchmark.] 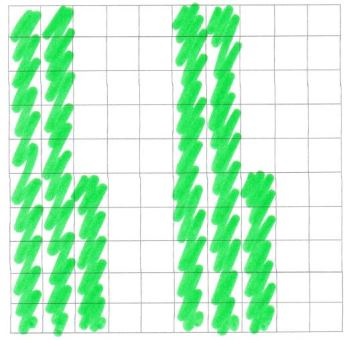 I wondered if this image would be helpful to scaffold to Mark Chubb’s image because I thought that students could more easily see that this image could be represented by 50/100 and ½, even though the squares shaded weren’t contiguous. I also wondered if this would be leading too much or if instead I should let students grapple.

When I drove to school to try the lesson, I hadn’t completely resolved what I’d do. For sure, this isn’t a lesson where I’ve polished the stone enough so that I’m confident about anticipating what students will do and deciding what might be the best teaching moves on my part.

Or are there “best” teaching moves?

And does teaching ever get easier?

Results from the Second Class
I felt more relaxed in this class, not because I had met these students previously, but because of my previous experience teaching the lesson. I felt better prepared to pay attention to students’ responses. I led the lesson in a similar manner.

An unplanned disruption was that after the students had looked at three images, a message appeared that the document camera was overheating and I had to turn it off immediately! I didn’t panic. Magnets were available for me to post the images on the whiteboard. And since the students were gathered on the rug as they as they usually are for math, each next to his or her pre-assigned math partner, they were close enough to see what I posted.

The students’ responses were similar to those for the images I had showed the first class and produced some interesting reasoning. For the new Image #6, students suggested both .25 and 1/4. When I showed Image #7 on the chalkboard (see below) students had a variety of suggestions. 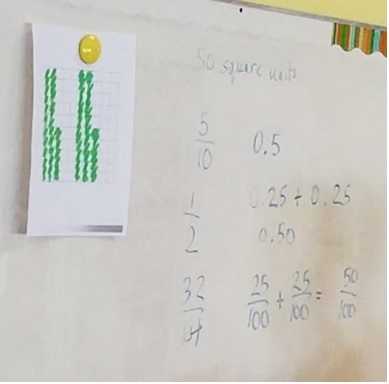 One student suggested 5/10 and explained, “You have four full columns and they are one tenth each and then the two short columns make one more tenth, so it’s five tenths all together.” Another student pointed out that you could add 0.25 and 0.25 to get 0.50, which was the same. A third student said that 1/4 plus 1/4 was 1/2. Another offered 1/2 as a possibility since 50 of the 100 squares were shaded. Another said you could use 32/64 since it’s equivalent to 1/2. I recorded all of them on the board next to the image.

[A fourth aside: When the boy suggested 32/64, I acknowledged that he was mathematically correct, but that I couldn’t see how 32/64 related to what was shaded. He shrugged and held to his claim that 32/64 was possible. I’m not sure how much I should have pressed with this. Ah, decisions, decisions.]

Next I posted Image #5, from the previous lesson. 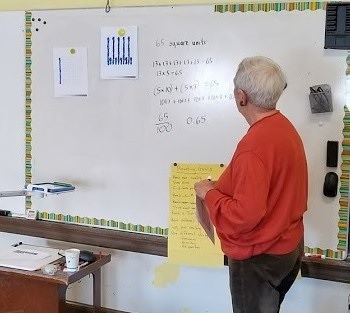 When we talked about this image, the students suggested equations that hadn’t come up in the other class, focusing on ways to figure out that 65 squares were shaded. After this, I presented the problem to them as I had done in the first class, posting the image from the Tweet, giving the writing prompt, and explaining that is was to be a first draft for a persuasive essay. 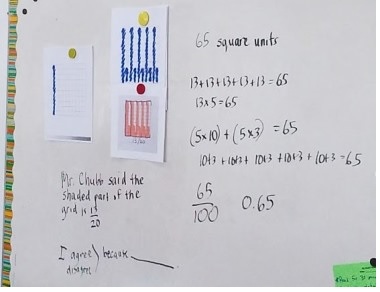 The students began writing. In this class, 10 agreed with Mr. Chubb, 11 disagreed, and 3 weren’t sure.

Results from the Third Class
When I taught the lesson in the third class, I decided to use the presentation as I did with the second class. From my experience with two other classes, I had a better sense about what to anticipate from students’ responses. Also, because I was more familiar with what I planned to do, I didn’t have to pay as much attention to my lesson plan. This enabled me to direct my energy into paying attention more to what the students were doing and thinking more than to what I had planned to do next. This resulted in my slowing down the conversations and hearing even more from students. 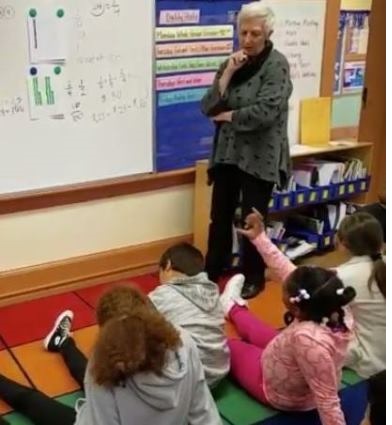 I slowed down our class discussion so much that I never got to the 13/20 image and the writing assignment I had planned and done with the other two classes. That would have to wait for another day. But this lesson was useful for setting the stage for the writing assignment and learning about what the students were thinking.

I’m Stopping Here
I could write more about the decisions I made in each class, but this blog has gone on long enough. If you have questions about how I arrived at any of the teaching decisions I made, or any suggestions, feel free to post your ideas and I’ll do my best to respond.

One Last Comment
I described my experience with this lesson in the talk I gave on December 2, 2017, at the California Mathematics Council North Conference at Asilomar. If you’ve never attended this conference, consider coming. The venue is beautiful and the conference never disappoints. I had a slew of conversations about the 13/20 problem, with people questioning, wondering, and searching with me. One friend said that she remained uncomfortable with 13/20 being a number to represent Mark’s image, in the same way I was uncomfortable with a boy’s suggestion of 32/64 for Image #7. Her suggestion for a way to show 13/20 was this: 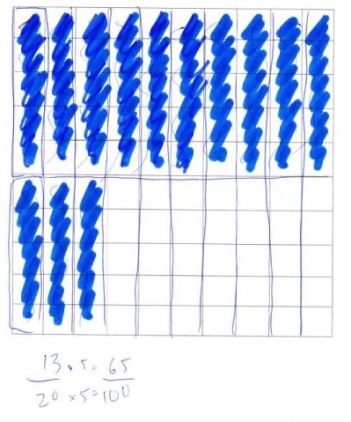